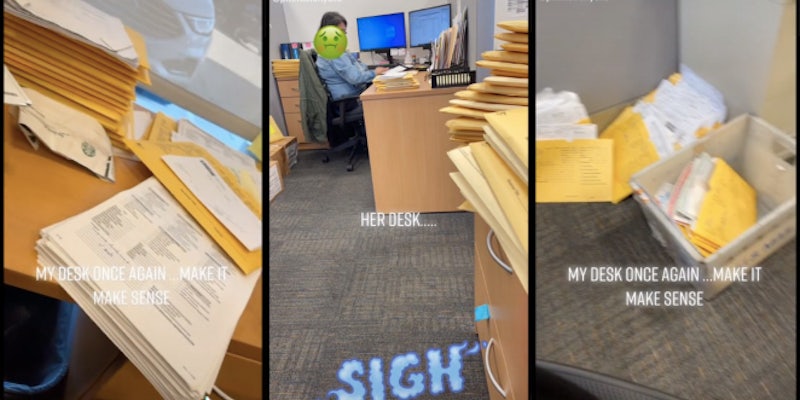 ‘Another day of this bs’: Worker shows difference between workload on her desk vs. her co-worker’s, sparking debate

'Find another job and then let them know your last day 5 minutes before.'

A woman has sparked a discussion on TikTok after posting a video showing her desk compared with that of her co-worker.

In a video with over 563,000 views, user Porschia (@pmmommyof6), who works as a title clerk for a dealership, shows her co-worker’s desk. On the desk is a moderate amount of padded envelopes. She then cuts to her own desk, which is covered in envelopes and accompanied by several baskets also containing work to be done.

“Make it make sense,” she wrote in the text overlaying the video.

In a study published earlier in the year by Quality Logo Products, “more than 90% of the workers we asked said at least one coworker annoys them.” Among the most cited reasons for annoyance were “taking credit for someone else’s work” and “not doing their work.”

While noting that specifics differ based on the situation, the Houston Chroncle laid out a few points workers should consider before coming to the conclusion that one is receiving more work than their co-workers. These include evaluating the expectations of the workplace, managing time more efficiently, and looking at one’s own work habits.

If these considerations are made, and one still feels they are receiving more work than their co-workers, there is unfortunately not much that can be done apart from contacting one’s boss. Differential treatment and favoritism in the workplace are legal, per Chron, and while approaching management may help reduce the workload, there is no legal requirement for bosses to manage workloads between employees.

The only exception is when one feels they are facing unequal treatment due to being a “protected class,” which include details like race, gender, religion, or nationality. This is illegal, per the Society for Human Resource Management.

In Porschia’s case, according to her story, there seems to be an imbalance between her co-worker’s workload and her own. Porschia said in the comments that the co-worker has only been working for three months longer than she has and that the workload visible in the video is the amount they were each assigned for the day.

Furthermore, Porschia claimed she has approached her boss about the imbalance on three different occasions. Each time, she said the conversation resulted in a discussion between all relevant parties but no enforceable solution.

“You are better than me… I would start packing my stuff, move all that to her desk, and walk the hell out. NO ONE is worth my peace of mind,” added another.

In a follow-up video, Porschia offers more details about her specific situation.

In the video, Porschia says that, given the type of work she does, there are ways to split the work in a more equitable manner—even if one’s co-workers do not have the proper skills or training to accomplish certain tasks.

The problem, she says, is poor management, including a failure to properly allocate workloads, inconsistent messages across different levels of management, and an inability to reprimand workers for actions Porschia feels deserve further criticism.

Still, she says that, despite the heavy stress that the work imbalance creates, she managed to get the workload visible in the video done in the expected timeframe.

“I’m a damn good worker,” she proudly states. “All that work that y’all saw? I definitely got it done.”

Under this video, users encouraged Porschia to both “quiet quit” and start looking for new work.

“Find another job and then let them know your last day. 5 minutes before your last shift ends,” stated a commenter.

“Listen, lots of companies are hiring right now, remote work included. Find something better and move on,” agreed a second. “Nothing is going to change there! Trust me!”

The Daily Dot reached out to Porschia via TikTok comment.