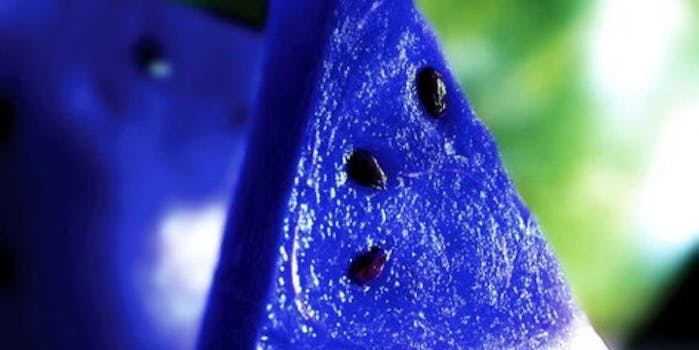 A history of Moonmelon, the most popular fruit that doesn’t actually exist

Sorry, you will never taste this. You can't eat Photoshop.

Imagine a beautiful, lucid piece of fruit—a deep, yet vivid, almost electrifying shade of blue. The magic doesn’t end at its aesthetics, though: The Japanese fruit has the ability to alter flavors after you eat. All things sour become sweet; salty foods become bitter. Water is not just water—it’s orange-flavored.

This is the amazing Moonmelon, and it’s obviously not real.

The Moonmelon is one of many Internet hoaxes that received much of its faulty fame from Pinterest. Clearly, Moonmelon is just a photo of a watermelon where the color pink has been replaced with a bright shade of blue. This, paired with a short description about the mythical melon, has managed to captivate and fool many a bored Pinner.

Moonmelon has made suckers out of the Internet since May 2011, when the phrase went from 0 mentions to nearly 100. While Pinterest has been a safe, welcoming, viral home for the Moonmelon, Tumblr is just as responsible for all this nonsense.

Despite the many notes suggesting this was fake or looked Photoshopped, the post appears to have had a hand in the viral spread of Moonmelon. Days after this post went up, Yahoo Answers naturally had to discuss the fruit. Strangely, there’s a story from a few days before the madness began discussing “Moon and Stars” heirloom watermelons for growers… so perhaps it was the inspiration for the whole thing?

There really is a “miracle fruit” that temporarily tricks your tastebuds into experiencing strange new flavors—but it’s not called Moonmelon, and it’s not blue. The New York Times covered the “flavor-tripping” trend in 2008, in an article that could have directly inspired Moonmelon’s supposed taste-warping powers.

Of course, after the Moonmelon hoax went viral, there were the stories debunking it.

They haven’t worked terribly well, obviously, because the Moonmelon will not, cannot be killed. Trying to unmask it as a hoax only seems to make it stronger.

You can see that though there was a big dip right after the initial craze, Moonmelon’s Internet life has been a roller coaster, recently spiking again this past fall. Yet again, Tumblr and Pinterest are to blame. And this time, Twitter had a larger hand in the whole thing. 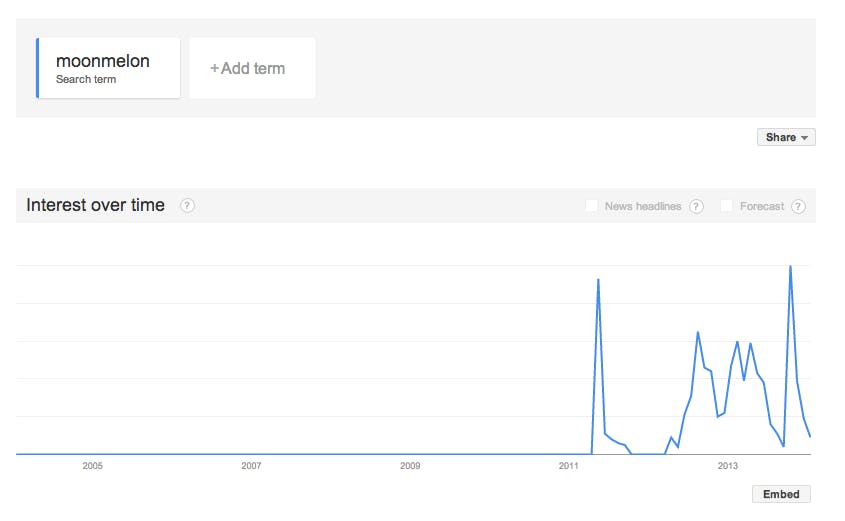 Perhaps this tweet from @Mindblowingfacts, which has over a million followers, can be traced to the recent resurgence.

Since then, there’s been a drop off, but as you can see, things are on the upswing for the Moonmelon as of the past few days.

I want to try moonmelon. It’s said to change the flavors of other foods as well after tasting. #Japan #LooksCool

Anyone ever had a moonmelon?

Somehow, the allure has not worn off. The Moonmelon and our inability to ever have it continues to haunt us. Don’t be fooled: you will never taste the fruits of your hunting for Moonmelon labors.