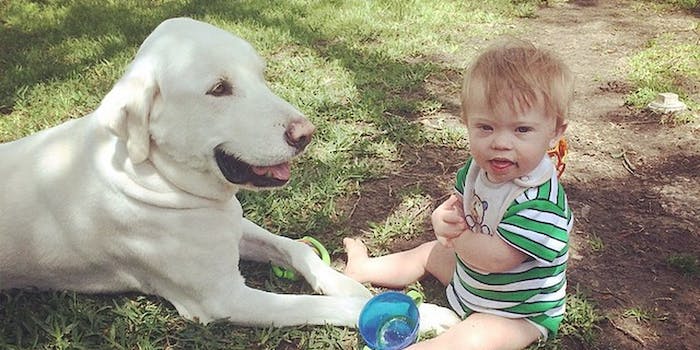 She didn’t take it lightly when an Internet troll insulted her son.

Megan Davies Mennes has been blogging and posting photos of her son Quinn online for some time now. Quinn has Down syndrome, and Mennes has dealt with a few nasty comments here and there, the type of stuff expect to encounter on the Internet.

A couple weeks ago, Mennes posted a photo of a smiling Quinn on Instagram after he was sick. It was adorable. (And, really, her entire Instagram is worth looking at because everything this kid does is adorable.)

“It’s been a long week of illness for this one, but it looks like he’s finally on the mend,” Mennes wrote.

She received encouraging words from her followers, but one comment, from a @JusesCrustHD, really rubbed her the wrong way. He called Quinn “ugly.”

Mennes knew this day would come eventually. She had experienced her fair share of mean comments and cruel behavior towards the Down syndrome community before, but this time someone attacked her son personally. Instead of just ignoring it, she decided to respond to him and give him some advice: Don’t be a jerk. See the response at the bottom of the pic below; Mennes goes by maemennes on Instagram. 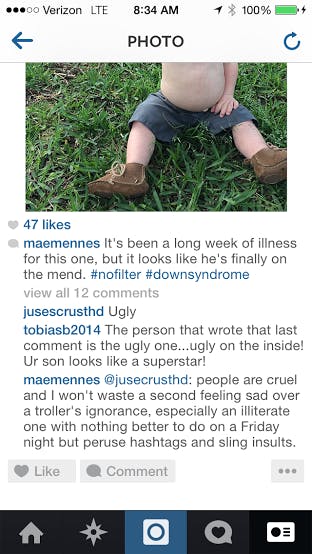 Mennes then reported the account, and it was shortly banned.

She wanted to take a different approach with the hope that her children would be able to treat others with “respect and dignity.”

“I’ll be honest; it’s hard not to be angry about it, but I can’t allow myself to carry that weight on my shoulders,” she wrote on her blog. “I can’t allow myself to feel anything but sorry for an individual with so little tact. Because in end, you will be the one to face the consequences of your choices someday.”