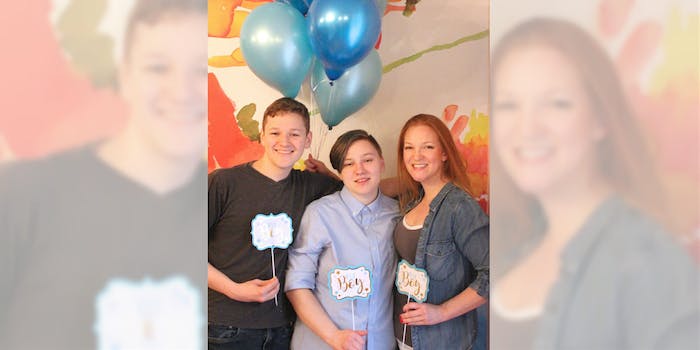 'I was determined to support him though his journey, but I had no idea how.'

A Kentucky mom has won the hearts of thousands of social media users after sharing images from a gender reveal photo shoot she staged for her 20-year-old transgender son.

Heather Lundberg Green, a mother of two, wanted to do something special to express her support after her son, Arian Brown, came out as trans last September, the Washington Post reports.

“When he told me he was transitioning, I was determined to support him though his journey, but I had no idea how,” Green wrote in a blog for Love What Matters.

Then Green dreamed up the photo shoot.  Even though Brown said he thought the idea was “nuts” at first, it’s clear the family had a good time following Green’s vision through. The photos show Brown swaddled in a blanket saying “it’s a boy” and cuddling a teddy bear, Green and Brown holding blue balloons, Green with a fake pregnant belly, and more. The teen daughter of Green’s boyfriend photographed the occasion.

“When your child comes out as trans, the best thing to do is create a photoshoot to celebrate the fact that he silently and bravely stepped out of the race that he never wanted to be in, found his own lane and proceeded to win,” Green wrote in her now-viral Facebook post on Jan. 29.

When your child comes out as trans, the best thing to do is create a photoshoot to celebrate the fact that he silently…

As of Friday morning, the post has more than 16,000 shares and hundreds of comments.

Brown told Louisville NBC affiliate WAVE that even though deciding to come out as transgender “was really scary,” the support online has been reassuring.

“I thought this was sort of a struggle I had to do by myself, and it’s really heartwarming to see so many people out there share the same story I do and are supportive of a complete stranger,” Brown told WAVE. “It gives me a lot of hope.”