Stina Sanders got honest about the less glamorous side of life.

Model Stina Sanders lost thousands of Instagram followers after she started sharing non-glamorous photos to show a more realistic side of her life on social media. Sanders was inspired to be more honest with her fans after Instagram star Essena O’Neill famously slammed social media for depicting edited and contrived versions of our lives rather than showing the truth.

Sanders’ fans apparently didn’t like that she started sharing Instagram posts about the uncomfortable process of body hair removal, struggling with Irritable Bowel Syndrome (IBS),and having lazy days, among other things. After sharing Instagram posts about these experiences, her follow count dropped from more than 13,000 to less than 10,000, according to People magazine.

Here are the photos she shared that showed her less glamorous side:

Thought I'd post you a photo before my pedi! Anyone who wants to take up running, I'd advise you not to. My toe nails are falling off, I have swollen ankles and disfigured toes. Delicious!

“Thought I’d post you a photo before my pedi!” She wrote. “Anyone who wants to take up running, I’d advise you not to. My toe nails are falling off, I have swollen ankles and disfigured toes. Delicious!”

Sanders told The Tab that she suspects her followers wanted more of her model self rather than her true self. She pointed out in a separate interview with the Huffington Post that Instagram is a place of aspiration for many, meaning people might not come to her page for reality.

“To see a photo of my bowel movements and not me in a bikini must have annoyed a lot of them,” she told Tab magazine. “It’s that kind of ‘I didn’t sign up for this’ attitude. Perhaps sharing my real life was too much for them.”

Despite initially losing thousands of followers, she has since gained more than 21,000 Instagram followers and many of her new fans have thanked her for keeping it real. Her IBS post in particular enabled commenters to discuss their own digestive issues: 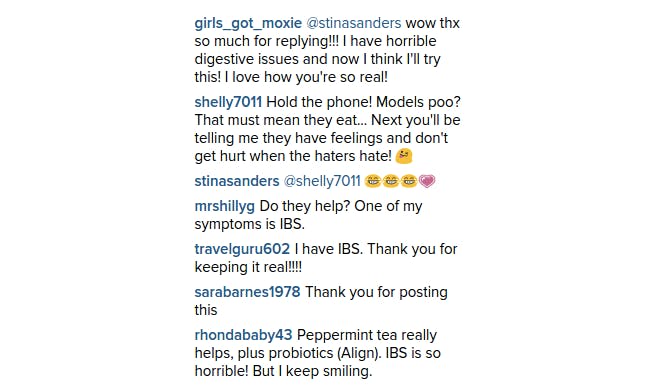 This comes a few weeks after O’Neill posted a tearful YouTube video about quitting social media.

“I’m the girl who had it all and I want to tell you that having it all on social media means absolutely nothing to your real life,” O’Neill said in the video, which she has since deleted. “Everything I was doing was edited and contrived and to get more views … Everything I did was for views, for likes, for followers.”

Before deleting her Instagram page altogether, O’Neill edited certain photos to rewrite captions that provided more context behind the images. For a photo in which she posed in a gorgeous white dress, she wrote, “I didn’t pay for the dress, took countless photos trying to look hot for Instagram, the formal made me feel incredibly alone.”

Though O’Neill was praised by many, including Sanders, some questioned her anti-social media campaign. YouTube stars and sisters Nina and Randa, who are also friends with O’Neill, claimed her social media abandonment was a stunt. The sisters said that O’Neill stayed with them during her visit to L.A. and that they suspected her anti-social media movement was sparked by a bad breakup. The sisters felt hurt that they would invite her into their home only for her to speak out against the culture of social media, fame, and L.A. in her video.