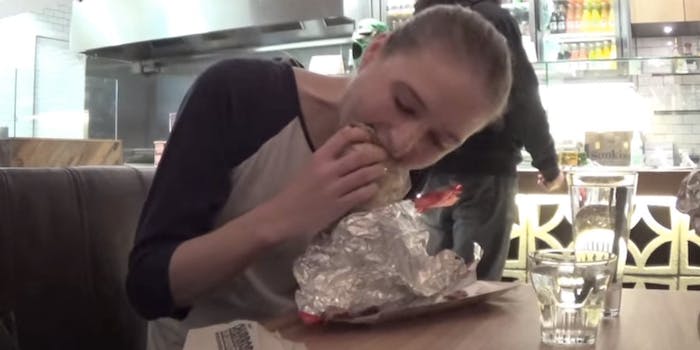 A fashion model ate a baby-sized burrito, and it was breathtaking

So you think you can eat a lot, bro? Think again.

New Zealand model Nela Zisser recently competed in the Mad Mex burrito challenge at a local Mexican food chain. The challenge requires you to consume the burrito in two minutes or less, and Zisser, who was Miss Earth New Zealand 2013, was up for the challenge.

She filmed a video of herself taking down the 2.2 pounds of rice -and-bean-y goodness in an alarming (but impressive) one minute and 44 seconds.

This was actually Zisser’s second attempt at the burrito challenge. She tried to conquer the burrito last May, and came up slightly short at two minutes and 40 seconds.

After the DJs at ZM radio in New Zealand saw Zisser’s incredible feat, they invited her on their show to consume 122 chicken nuggets in 20 minutes and break the YouTube record. Naturally, she took them down like a champ.

She’s also eaten burgers competitively, because there’s literally nothing she can’t do.