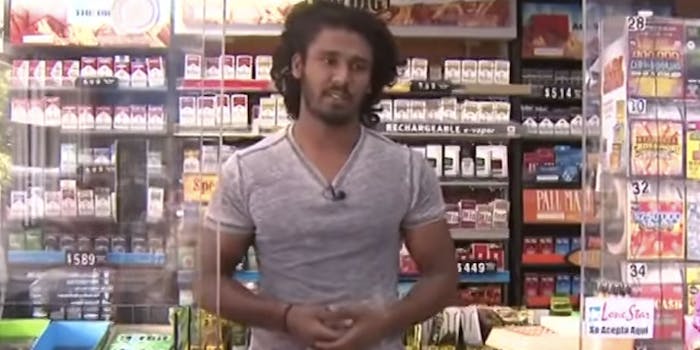 The men who tried to hold up Mayura Dissanayake's gas station didn't know he was an MMA champion.

Most people secretly fantasize about being held up by a group of robbers, only to turn the tables on them by whipping out our fists of fury, besting them with our impressive Krav Maga moves. But Mayura Dissanayake actually did this.

Dissanayake, a convenience store clerk in Houston, Texas, and five-time MMA champion in his native Sri Lanka, got to put his training to use when a group of armed robbers attempted to hold up his store earlier this month. Houston’s KPRC 2 has the story, as well as the surveillance footage from the incident:

According to KPRC, Dissanayake was behind the counter July 10 at a Fuel Depot in South Wayside, when he saw his co-worker pulling into the parking lot after returning from the bank. The co-worker had apparently been followed by a group of men in an SUV, who emerged from the car and started beating him up.

A five-time MMA champion who’s been training for more than a decade, Dissanayake immediately sprung to action, running out to the parking lot to defend his co-worker. “The first guy I saw, I just kicked him in the face,” Dissanayake told KPRC. “Then I punched the other guy.”

The assailants immediately retreated, leaving one of the accomplices, 33-year-old Odell Mathis, behind on the ground. Fearing he was armed with a knife or gun, Dissanayake put Mathis into submission, just as he does in the ring, until police arrived to arrest him.

The moral of this story? Armed robbery doesn’t pay, people. Especially if the guy you’re trying to armed rob is as jacked as Mayura Dissanayake. Look at this dude. The lady will have two tickets to the gun show, please.