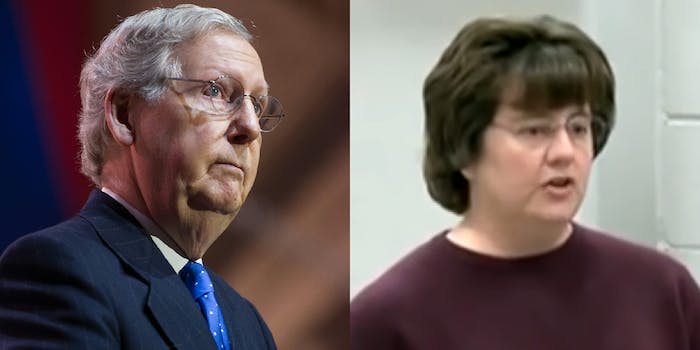 She isn't a college intern, McConnell.

.@SenateMajLdr: "We have hired a female assistant to go on staff and to ask these questions in a respectful and professional way. We want this hearing to be handled very professionally not a political sideshow…" #Kavanaugh pic.twitter.com/N0hGKA6NqX

Rachel Mitchell, from Arizona’s Maricopa County Attorney’s Office, is a highly experienced attorney with a 26-year history at the county alone, where she serves as the bureau chief of sex crimes. Even Senate Judiciary Committee Chair Chuck Grassley (R-Iowa) called her “a career prosecutor” with “decades of experience,” ABC15 reports.

So it’s strange that McConnell would call her a mere “female assistant.” This didn’t escape Twitter, which quickly swarmed McConnell for talking down an experienced attorney.

“Female assistant” is not the phrase I would have gone with. https://t.co/qpUTjBHGQM

Mitch McConnell calls the lawyer the GOP Senators on the Judiciary Committee have hired to do their job of questioning Dr. Ford for them a “female assistant.” And shockingly, none of the other GOP Senators show any surprise at the disrespect. https://t.co/g5jUqOJeNi

I thought a lawyer was going to question them. A "female assistant" seems unusual, is this in her job description?

So much wrong here. Not enough space. First of all, if you had appointed even one woman to the Judiciary Committee, you would not need to hire an “assistant” to ask Q’s. Second, are you saying none of your male colleagues know how to be respectful and professional to a woman? https://t.co/f4jLReDMfs

Worth noting: there has *never* been a female GOP senator on the Senate Judiciary committee. https://t.co/0SmzQHVWYR

‘We cannot manage asking a woman questions without embarrassing ourselves’ https://t.co/WVvJ4pvPtx

Granted, Mitchell is facing some scrutiny of her own, with many pointing to her mixed track record on prosecuting sex abuse crimes. In one case, a Jehova’s Witness elder only received six months in county jail after confessing to sexually abusing a teenage boy. Others view the county as fundamentally troubled: After all, Mitchell served alongside Maricopa County’s controversial Sheriff Joe Arpaio for most of her years in office.

😳 Is Rachel Mitchell, who will question Christine Blasey Ford, the Maricopa Prosecutor involved in the false imprisonment case of a man w the same name as an accused child molester⁉️ https://t.co/nvVvpEwq4g

Like, Mitchell was for the prosecution in this case, and still managed to reduce the sentencing from six class-two felonies to two class-six felonies to six months in jail and three years probation after the defendant *confessed* to sexually abusing a child.

She’s a registered Republican, per the Washington Post, so who do you think? https://t.co/Ay9h6YE3Yj

While Rachel Mitchell was sex crimes division bureau chief, 400+ sex-crimes reported to Sheriff Joe Arpaio's office between 2004 & 2007 [including dozens of child molestations] were inadequately investigated or not worked at all.@Delavegalaw @kim #Maddow https://t.co/H9D9OKQFWk

Dr. Ford is set to testify tomorrow in an open hearing with the Senate Judiciary Committee, where Mitchell will help question Ford on her accusations against Kavanaugh.