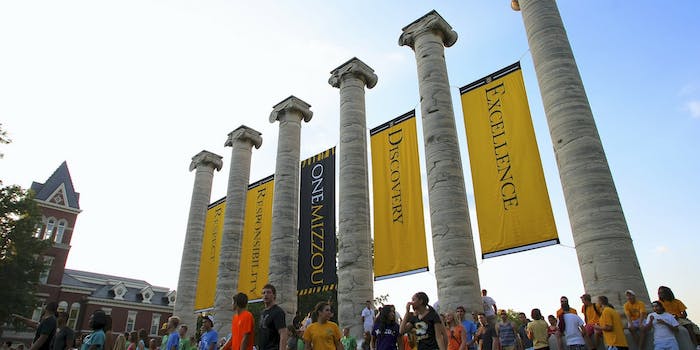 'You need to back up if you're with the media!'

“You need to back up if you’re with the media!”

Journalists were pushed and told to leave a protest on public land at the University of Missouri on Monday, according to a newly released 12-minute version of a video that showcases the stark conflict building between media and the protesters.

On Monday, a six-minute video showing a Mizzou professor call for “muscle” to restrict press access to the protesters’ encampment on the school grounds instigated a national discussion on press freedoms. The video released Tuesday shows more of the conflict and its aftermath.

Faculty, including University of Missouri assistant professor of mass media Melissa Click—the one who called for “muscle”—aided students in pushing media back from a self-declared safe space that was in the middle of public university land.

When reminded that the protest, organized under the name Concerned Student 1950—a reference to the first year MU allowed black students, was taking place on public property, Click becomes sarcastic and demands 22-year-old photographer Mark Schierbecker, who filmed the video, leave. A group of students then pushed Schierbecker away as he explained that police would not arrest him for filming despite threats from protesters.

MU faculty member @melissaclick and staffer @baslerjd, shame on you for your behavior today. Shame! https://t.co/ey7IjmClWV via @YouTube

The protests at MU follow months of tension over the school administration’s response—or lack of response—to racial slurs and other acts of racism against black students, which make up only a fraction of the university’s 35,000 students.

The protests included student hunger strikes and vows from the university’s football team to not play until University of Missouri system president Thomas Wolfe resigned, which he did on Monday. MU Chancellor R. Bowen Loftin also announced Monday that he would step down at the end of the year.

The video centers around Tim Tai, a 20-year-old student photographer who was hired to take pictures of the protests for ESPN, and his contentious debate with student and faculty protesters, who demanded he “back off” because he’s being “disrespectful” of their space.

Numerous students and university employees caught on film touching, pushing, and pulling Tai then immediately claim they never touched him, even in the moments after they attempt to stop him taking photographs by grabbing his arm.

“I’m walking forward,” one student explained on the video, as he walks directly into Tai.

“You’re pushing me,” Tai responded. Throughout the exchange, he reminded protesters, correctly, that the First Amendment protects both of their rights to be on the public space.

The protesters continued to push on.

“It’s our right to walk forward,” another student said.

Tweets from the official Concerned Student 1950 Twitter account justified the confrontation, saying that journalists were “very hostile” when the protesters asked them not to enter their encampment.

In response to the controversy sparked by his video, Schierbecker condemned the “human meat wall that rolls over journalists doing their jobs.”

Official statement: I will not allow students to silence dissent by becoming a human meat wall that rolls over journalists doing their jobs.

Tai has attempted to distance himself from the controversy and denounced those who sent threatening messages to the protesters involved in the confrontation.

A lot of hardworking journalists were physically blocked from doing their jobs – I just happened to be on video. I didn't ask for notoriety.

I don't have any ill will toward the people in the video. I think they had good intentions though I'm not sure why it resorted to shoving.

My personal intention has never been to vilify the people in the video and I'm not sure why anyone thought it was OK to send them threats.

I wish it could have turned into a learning experience on both ends, like the positive encounter I had with CS1950's Reuben Faloughi later.

I'm a little perturbed at being part of the story, so maybe let's focus some more reporting on systemic racism in higher ed institutions.

Have learned that some people in the video with me are getting death threats. That's unacceptable and sickening.

Just want to reiterate that while I think we need to talk about the 1st Am issues from today, the larger story is not about that.