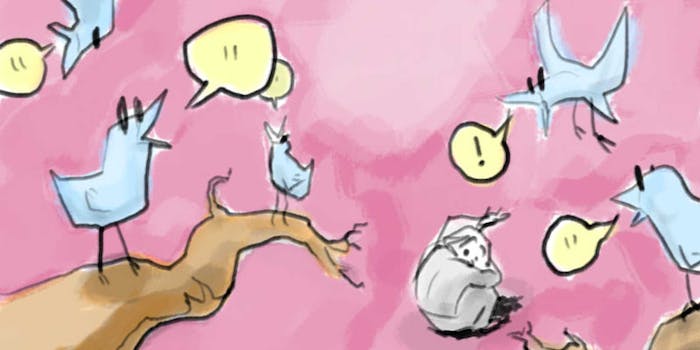 Prior to disappearing, Teleka Patrick appeared to be losing her mental stability.

In a so-far fruitless search for a missing Kalamazoo, Mich. woman, tweets from her personal accounts reveal clues regarding her possible mental state in the months leading up to her disappearance.

Teleka Patrick, 30, went missing on Dec. 5, following months of some 20,000 tweets, which included doubts about her mental stability and messages to gospel singer Marvin Sapp.

Posting tweets from two handles, @TelekaPatrick and @PatientMuchkin, the psychiatric intern wrote about how she had hallucinations, which apparently became worse within the past year. Both accounts were deleted before her disappearance, but Patrick’s posts can be found through archived pages.

“My mind melted,” Patrick wrote of a mental breakdown. “Everything went haywire. Signals got crossed and my mind started telling me that everything is a lie and I’m crazy.”

While Patrick’s family and friends described her as a woman with a bright future, Patrick’s ex-husband claims Patrick experienced delusions and urged her to receive psychiatric help. She refused and never sought medical consultation. Police reported, however, that Patrick wrote about taking Invega, a drug used for schizophrenia.

Her fascination with Sapp signaled strange behavior as well. None of Patrick’s tweets explicitly named Sapp or included his Twitter handle, MLive reports, but her descriptions fit him and the publication claims it was clear she was talking about him. After claiming God told her the two will be married, Patrick began pursuing him through tweets and claimed she was able to communicate telepathically with Sapp. After completing a doctorate degree in biochemistry from Loma Linda University in California, Patrick moved to Kalamazoo to begin residency at Borgess Medical Center in order to be closer to him.

Patrick began attending services at Full Life Center Church in Grand Rapids, where Sapp was a pastor, and she began sending him inappropriate emails and photos. She also showed up at Sapp’s home and attempted to talk to his three children.

Sapp claims he never replied to any of Patrick’s emails or met her. His lack of response made her worry about her own reputation. “I can’t be believing that things aren’t true. I’m trying to become a psychiatrist, not be in need of one,” she wrote.

Sapp wrote a letter to Patrick in September informing her that he issued a Personal Protection Order against her after she elicited a “feeling of discomfort.” He also removed her from the church roster.

Patrick claimed the protection order was full of lies and expressed feelings of depression and suicidal thoughts. On Dec. 4, Patrick tweeted, “You reach me through a demonic portal. That gives demons power over me and dilutes my spiritual authority.”

She disappeared the next day, leaving no clues regarding her whereabouts, through police found her gold Lexus abandoned along I-94 in Porter, Ind. after she failed to book a room at a nearby Radisson Hotel. Police searched Lake Charles in Porter on Jan. 23 but were not able to find “anything of evidentiary value.” On Feb. 5, reports surfaced of a possible sighting of Patrick at a Wal Mart in Battle Creek, Mich., which turned out to be false.

Patrick has now been missing for 11 weeks, and her family is offering a $25,000 reward. A Find Teleka Facebook page has almost 12,000 likes. “Dear God,” a Feb. 6 post reads, “You know our hearts. You know our worries. You know where Your child is. If it is Your will, please bring her home to us whole.”

Illustration via petesimon/Flickr (CC BY 2.0)