Stewart Mills is running as a conservative family man...who jokes about peeing on corpses.

Someday, politicians will learn to clean out their social media accounts before running for office.

Stewart Mills is running for the U.S. House of Representatives against Rick Nolan in Minnesota’s 8th congressional district. Mills presents himself as a conservative family man who once worked for the family business, Mills Fleet Farm, before transitioning into politics. But according to screenshots obtained by CityPapers, Mills’s Facebook page is full of misogynistic jokes and immature antics.

In photos posted by Mills’s stepdaughter, the congressman is seen drinking out of a beer bong and generally partying. While it might have been a good idea to remove those before campaigning, the occasional night of binge drinking is not a bellwether of responsible leadership.

Mills’s campaign did respond to the photos, saying, “My wife and I have had many lighthearted moments in our lives but right now I am focused on my congressional campaign and the disastrous effects of our overreaching government and sky high unemployment in the north eastern Minnesota [sic].”

However, what may be more concerning are other posts between 2009 and 2012 that paint the candidate as a deeply problematic bro. In one, he shares an article that suggests women swallowing semen helps them fight depression, and when a woman suggests that perhaps the findings are skewed, he jokes, “We all want to make the world a better place, this is just the way I choose to contribute.”

In another post, he uploaded the trailer to the 2013 Nordic horror film Thale, which features a nude woman with a tail in the video still. But the kicker is a 2009 post in which he jokes that the only reason he participated in a charity event for a women’s shelter is because his wife was taking care of the kids and cooking dinner while he was on Facebook. He then proceeded to make a joke about “500,000 battered women.” 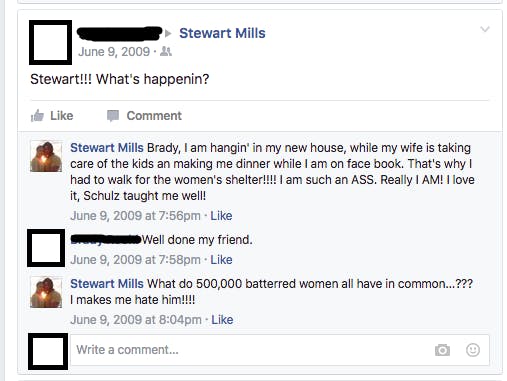 In looking through Mills’s personal page, some of which is publicly available, there is also a post about Marines being punished for urinating on the corpses of Taliban members, which Mills suggests was not such a terrible thing for the Marines to do.

Calls to Mills’s campaign office have gone unanswered. Mills is, of course, entitled to his personal life and personal opinions. But he should realize that anybody who has access to Facebook is entitled to look at them.