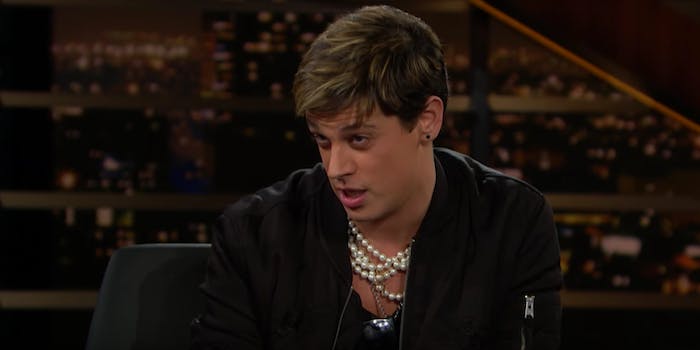 Milo Yiannopoulos has seemingly laid low in the months following his departure from far-right online publication Breitbart amid his comments on pedophiles, but in the time since, he says he’s already bankrolled millions off his provocative (leaning toward offensive) conservative stances.

On Friday, Yiannopoulos announced the launch of his media startup venture geared toward promoting conservativism and “free speech” while bashing anyone to the left of his far-right views. The business, MILO Inc., will be based in Miami with a staff of 30, and it’ll act as a conservative talent pool of “libertarian and conservative comedians, writers, stand-up comics, intellectuals,” and more, Yiannopoulos told Vanity Fair’s the Hive.

And the best part? Yiannopoulos’s goal of the company, which has already raised $12 million from anonymous donors, is to contribute to his newfound pledge to use “every waking moment of the rest of [his] life making the lives of journalists, professors, politicians, feminists, Black Lives Matter activists, and other professional victims a living hell.”

“This isn’t some vanity nameplate on a personal blog,” Yiannopolous said in the press release. “This is a fully tooled-up talent factory and management company dedicated to the destruction of political correctness and the progressive left.”

MILO Inc. will kick off its dive into conservative media with a livestreamed party dedicated to promoting Yiannopolous’s new book on May 5, the event offensively named Cinco de Milo, a parody of the Mexican holiday.

MILO Inc. will also congregate at U.C. Berkeley, where its founder’s speech from earlier this year led to massive rioting, for what Yiannopolous calls a “week-long celebration of free speech.” At the event, they’ll hand out their inaugural “Mario Savio Award for Free Speech,” named after one of the leaders of Berkeley’s Free Speech movement in the 1960s. Savio’s son has called the award “some kind of sick joke.”

Currently Yiannopoulos is MILO Inc.’s main talent, basically meaning that the right-wing provocateur talked investors into giving him millions to continue spreading his own progressive-hating rhetoric. But he told the Hive that he has access to an undiscovered “talent pipeline” of “YouTubers” and other bashers of political correctness, and he plans to expand MILO Inc. to include other of these personalities.

Essentially, it sounds like Yiannopoulos is looking to pump MILO Inc. with Tomi Lahrens to his Glenn Beck (pre-pro-choice comments, of course)—someone who is young, opinionated, and parrots his own set of ideals better than he does.

“This generation that’s coming up … now have very different politics than most other generations. They love us. They love me, and I’m going to be actively hunting around for the next Milo,” Yiannopoulos said.