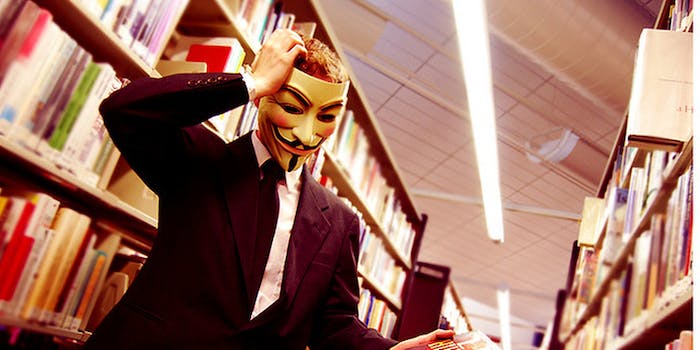 John Fairhurst was about to sell his motorcycle to make the Million Mask March happen. Turns out, he didn't need to.

John Fairhurst, lead organizer of the hacking collective Anonymous’ Million Mask March set to hit the National Mall in Washington, D.C. and other locations on Nov. 5, has been done an anonymous good turn.

Fairhurst refused donations for the march’s costs, which include renting a stage and sound system, in service of keeping it 100-percent free. He quietly put his beloved motorcycle up for sale on Craigslist, hoping to use the proceeds to power his organizing efforts. But other anons doxed his do-goodism and were doxed in return.

According to the Digital Journal, a lady called Fairhurst and offered to buy the bike for her son.

The mystery caller was part of Project J, an internal Anonymous operation put together solely to help fund the march by covertly buying Fairhurst’s motorcycle, intending to give it back to him at the event.

Alas, keeping things quiet around a bunch of people who are used to peeking under tarps was difficult. Within a day, Fairhurst found out he was the beneficiary of the op.

The 159 Facebook shares for Project J may have had something to do with it, given the march’s official site is its Facebook events page.

The money for the purchase, which totalled $690 prior to the lid getting blown off, was raised via a secret fundraising campaign on GoFundMe.

Because the money was donated anonymously, it would have been largely impossible to refund it, so, touched, Fairhurst elected to accept it as a donation to the march, which he will, presumably, journey to on his motorcycle.