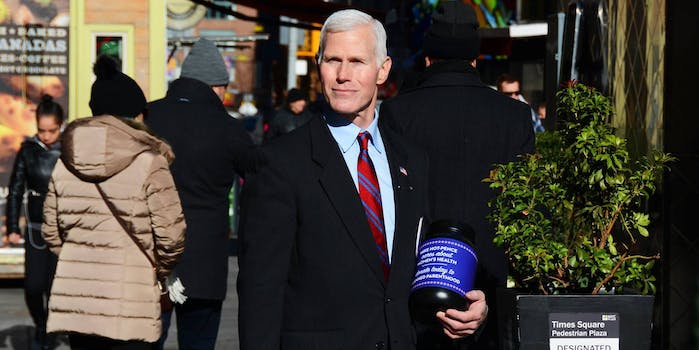 Let us introduce you to Mike Hot-Pence.

Vice president-elect Mike Pence isn’t known as a LGBT advocate. Far from it, actually. Though he now denies it, Pence was an advocate for conversion therapy, and he has a long anti-LGBT and anti-abortion record.

After Pence was elected to the vice presidency as Donald Trump’s running mate, Glen Pannell—a gay man who happens to look like Pence—decided to take action.

He put on a suit and tie but replaced the pants with short shorts and renamed himself “Mike Hot-Pence.” This month, he’s been walking around in New York’s Times Square raising money for Planned Parenthood, environmental organizations, and LGBT causes, including the Trevor Project—which focuses on preventing suicide among LGBT youths.

“I am raising money for groups that would be especially vulnerable during a Trump/Pence administration,” Pannell told the New York Daily News. “ … His policy over the last 16 years makes me very afraid for the next four years. I want to make it about the issues.”

Dollars collected for @NRDC today: $133.59. Donation made and acknowledged. Thanks to all who gave! pic.twitter.com/EbdZLz79Xk

Dollars collected for Planned Parenthood today: $171.21. Donation made and acknowledged. Thanks to all who gave! pic.twitter.com/GvBDq3YNkN

As for how he got started, Pannell said he began noticing Pence during the Republican National Convention last summer when a few friends told him he looked like Indiana’s governor. Pannell happens to have family in Indiana, and he followed the news of Pence signing a controversial religious freedom bill in 2015. That made Pannell begin thinking about his response.

“I’m gay so that made me sit up and take notice,” Pannell told hesherman.com. “And it’s those kinds of policy decisions that are energizing my activism now.”

Pannell was first spotted in Times Square by Howard Sherman, an arts writer who posted the image to his Facebook page.

Ultimately, Pannell hopes he can make a difference in combating Pence’s anti-LGBT rhetoric.

“I want to raise dollars and I want to raise awareness,” Pannell told the Huffington Post. “And maybe offer some hope too. Isn’t it nice to imagine a bizarre through-the-looking-glass alternate reality where there’s a Mike Pence who champions women’s health and LGBTQ rights and the environment? Well that’s me.”