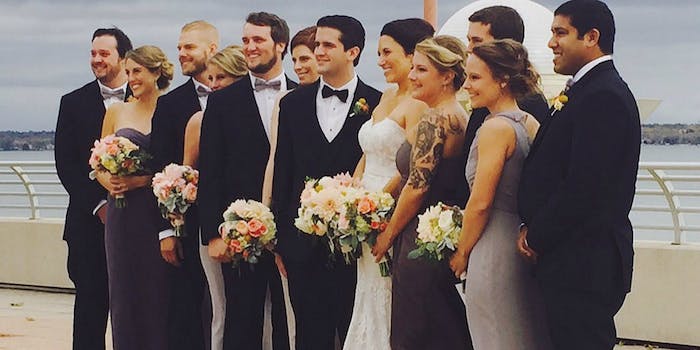 'Til death (or 'til Ohio State beats Michigan) do us part.

Comment sections are mostly vile places where civilized conversations go to die violent deaths and where trolls rule their landscape like the cruelest of kings. But if you look closely—if you can crawl your way through all the detritus and debris and avoid the acidic arrows pointed at your heart—you might find love.

At least, that was the case for two Michigan fans who met in an ESPN.com blog post’s comments section, met up in real life, fell in love, and got married.

Kate Queram and Brandon Wagoner, originally known to each other only as bleu_girl_04 and AAWolv, met in the comments of ESPN’s Big Ten blog. The groom had been a Wolverines fan all his life, and even though the bride had been raised in Madison by parents who graduated from the University of Wisconsin, she matriculated to Michigan for college and then became an enormous Wolverines fan herself.

Wagoner and Queram wrote to each other online and gradually grew more flirty. Did Wagoner worried that Queram was catfishing him—especially in the wake of the 2013 Manti T’eo controversy and his fake girlfriend Lennay Kekua? Not really

But as ESPN explained, “Brandon started getting nervous about being catfished, so Kate proved her existence by sending him a link to her Twitter page. He responded by sending her his Google-plus profile, which allowed them to chat offline. Soon, they exchanged cell numbers.”

Long story short: He called; they talked; he drove 12 hours from Ann Arbor to her home in Wilmington, North Carolina, to meet; they liked each other; they broke the news on the blog that they were a couple; he moved to be near her; and they got married earlier this month, during, of course, a Michigan bye week.

GETTING MARRIED IS THE BEST IF YOU WERE WONDERING #profeshtweets pic.twitter.com/lndoVCWQ4v

As Queram’s maid of honor told ESPN, “It was love at first type.”

The fact that it happened in a blog comment section is rather amazing. The fact that she wasn’t fake was a bonus.

Said Wagoner: “She’s better looking than Lennay Kekua, and real, so it turned out pretty well.”