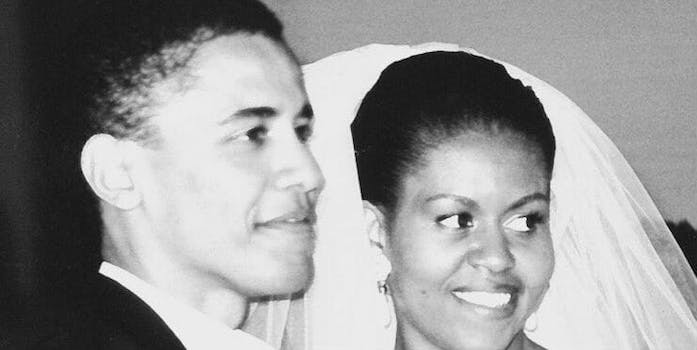 It's the #relationshipgoals bright spot we needed right now.

In the bleak aftermath of the Las Vegas mass shooting that took place on Sunday, Michelle Obama is supplying us a much-needed ray of light and love.

The former first lady uploaded a photo to Twitter celebrating her and Barack Obama’s 25th anniversary, leaving her “best friend” and husband a sweet message paired with a black and white photo from their wedding.

Happy 25th anniversary @barackobama. A quarter of a century later, you're still my best friend & the most extraordinary man I know. I 💕 you. pic.twitter.com/y0nevQmatB

Naturally, the internet began flooding Michelle’s mentions with adorable GIFs, photos, and memories from the Obamas’eight-year tenure in the White House alongside messages of how missed they are.

For your anniversary we would like to gift you back America. Please come back

When I see what we had and what we have now I feel like crying. 😭😭😭

Happy Anniversary to one of my favorite couples ever!!! 👸🏾🤴🏾 👰🏾🤵🏾May God continue to bless you and your family 💖🙏🏾💖

Dear First Lady and President Obama: We miss the quiet dignity, thoughtfulness & strength you brought 2 the office & ur work 4 all Americans

The entire CIVILIZED WORLD misses the grace, intelligence and compassion of the Obamas, now more than ever.#HappyAnniversary

Even Sen. Kamala Harris of California chimed in with love for the iconic couple.

Happy Anniversary to my favorite First Couple!! May you enjoy 25+ more years of bliss together. We love you!! 😘🤗❤️❤️

The former president has yet to share his own message on social media, but judging from past public displays of affection toward his wife, it is sure to be equally amazing. Barack made waves online just last week after he admitted to crying when he dropped off their eldest daughter, Malia, at Harvard for college.

In the meantime, we can bask in the warmth and affection of past photos of the two showing off their #relationshipgoals.

Exhibit A: The couple who bops together, no matter the jam.

Exhibit B: The partner who supports you for you.

Happy Anniversary to an exemplary couple. And y'all are adorable, too. ❤️ pic.twitter.com/fNpTKfdguY

Exhibit C: When you have each other’s back after a long and stressful workday.

Exhibit D: When you can find the laughter in everything you do.

Exhibit E: When you’re looking good and your husband knows it and owns it.

Seriously, the love between these two is just unreal.

Gosh, genuine love.
I wish someone would look at me the way Barry looks at Michelle! Wow!
Happy 25th anniversary my loves.
Barry & Michelle pic.twitter.com/VFVd4DrKND