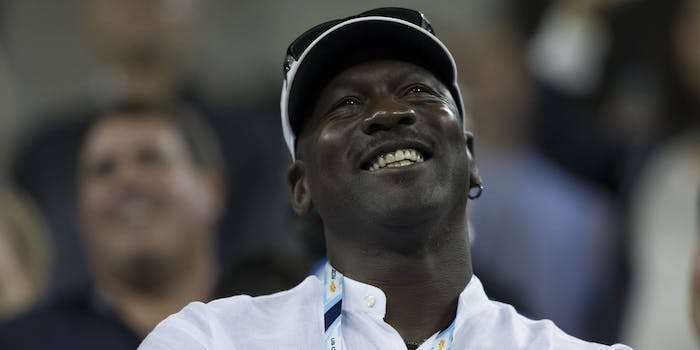 'I sent you a bunch of stuff so you don't have to wear the same outfit.'

The man who went viral in July for playing pickup basketball in head-to-toe Michael Jordan gear got a major surprise from the legend himself.

Jeffrey Harrison, a 33-year-old man with autism from Coeur D’Alene, Idaho, first became an internet sensation after footage of him playing in Chicago Bulls regalia took off on Twitter. The Internet quickly dubbed him “CDA MJ,” and another legend was born.

Well, turns out the CDA MJ video came to the attention of Jordan himself. The Chicago Bulls star then surprised Harrison this month with a phone call, a letter, and two entire boxes of Jordan gear.

Local news station KREM first got in touch with Jordan after doing a segment on Harrison back in July.

Michael Jordan sent two boxes of gear to Jeffrey Harrison after seeing video of him playing hoops in his MJ uniform. pic.twitter.com/ZV0c7KpJcQ

Harrison was obviously overjoyed at hearing from his idol but still managed to keep his cool. Jordan sounded genuinely touched as he spoke to Harrison.

“I sent you a bunch of stuff so you don’t have to wear the same outfit. You can wear anything you want to wear to go out and play basketball now,” Jordan tells Harrison.

KREM captured the phone call between Harrison and his idol, which you can watch below:

Twitter user Bubba Scarfs first posted a video of Harrison playing on the Fourth of July. Something about seeing a guy so passionate his idol that he shows up to the court in full-on Jordan regalia, complete with leg and arm band, made the crowd go wild. Harrison was in love with Jordan, and the internet was in love with Harrison.

It was one of those rare feel-good videos that appealed to everyone regardless of demographic. The Bubba Scarfs tweet promptly got more than 10 thousand retweets and was spotted by KREM.

KREM then did a story on the local man turned social media star, and found out what the internet and other news outlets didn’t notice. The local Jordan look-alike has autism, which forces him to live at home with his family and go unemployed. Even though Harrison is a regular at pick-up basketball games in Coeur-D’Alene, his autism sometimes means he doesn’t get the best treatment from other players.

Harrison told KREM that he doesn’t let people’s less-than-stellar behavior discourage him. Jordan encouraged Harrison in a letter to hold on to that positive attitude.

“Continue to believe in yourself. Play hard, and always remember to enjoy the game,” wrote Jordan.

Update 2:25pm CT, Aug. 14: The Daily Dot reached out to Justin Hardiman, the man behind Bubba Scarfs Twitter account who first spotted CDA MJ. Hardiman, a marketing major at Xavier University, was visiting family in Coeur D’Alene with his roommate. He and his roommate were on their way to the court to play some basketball when they spotted Harrison in his full Jordan get-up. After Hardiman posted footage he took of Harrison on Twitter, his phone died.

By the time Hardiman plugged it in, he had over 5,000 notifications on Twitter. To say he was surprised would be an understatement. Hardiman said he first shot the video to show his friends who are basketball fans. He never imagined it would take off the way it did, but certainly understands its appeal.

“Initially I think they liked [the video] because of [Harrison’s] attention to detail. But as the full story of who he is came out, it was heartwarming,” wrote Hardiman in a direct message.

Hardiman then asked his followers to help him track down CDA MJ, which led him and local media to Harrison’s friend, Alfred Byrd.

As Byrd revealed to KREM, Harrison is not on medication for his autism and relies on basketball as both a release and for enjoyment.

As close friend @AlfredByrd told me, he doesn't take meds for his autism. Basketball is his drug. Something to focus his time & energy on.

Byrd stated on Twitter that he couldn’t sit idly by and let his friend be made fun of. He took action and advocated for Harrison, eventually helping to get the attention of Jordan and even provide a memorable experience for the journalists who covered the story.

Thank YOU Alfred. Most amazing experience I've had on the job. Really appreciate your help. Got a winner in Jeffrey! https://t.co/ZfPimXsUDU