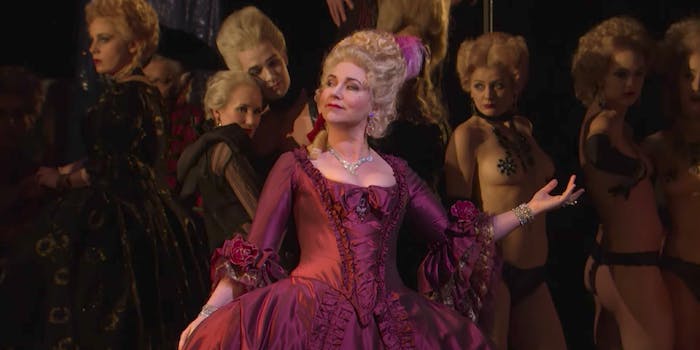 Opera pays performers based on level of nudity

Opera performers are being required to cover up—and lose out on $200 a show.

The Met Opera has cut down on its budget for this year’s production of Les Contes d’Hoffmann—and certain performers are suffering a pay cut more than others. The defining feature for whose check gets the ax? Whether you wear a nipple cover or a bra.

According to Patch, the production follows a German poet and his love affairs and features seven actresses who play nearly-nude Venetian prostitutes, typically wearing costumes of black heels, thongs, gloves, and black pasties over their nipples. However, in an effort to save thousands of dollars to quell the Met Opera’s overall financial problems, production has cut the pay rate for actresses wearing bras instead of just pasties in some of the performances.

Of the seven women playing Venetian prostitutes, six are being paid $448 a show to wear pasties in four or five of the nine performances, but just $235 to wear a bra for each of the remaining four or five shows.

To add insult to injury, the actresses weren’t made aware of the pay cuts until a few weeks before rehearsals, and the Met didn’t reveal what the lower-paying costume would be until after the beginning of rehearsals. Initially, the Met had wanted to pay the performers $128 to wear the bra, cutting 72 percent of their original pay, but the performers pushed back for the $235 rate. The Met didn’t approve the compromise until the night before the show’s opening performance.

According to Deborah Allton-Maher—the associate executive director for the American Guild of Musical Artists (AGMA), of which the one Met staff in the performance is a member—performers are typically paid differently depending on the demands of the role, but these demands have not changed from previous years.

“It was quite humiliating and very upsetting for these women,” Allton-Maher said.

Regardless of their costume, the women are performing complex choreography in four-inch heels, a function of their performance more valuable than their nudity, a person familiar with the production told Patch.

“The pay cut suggests that the value of the actresses’ work is negligible, and the only thing that makes it valuable is the nudity,” the person said.