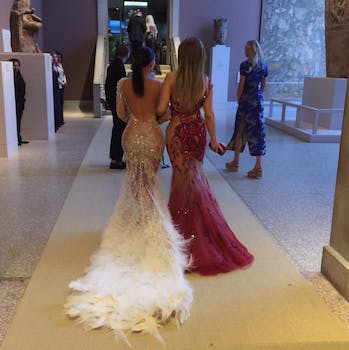 The best (and worst) ensembles from the 2015 Met Gala

The biggest trend for 2015: Dressing like a majestic space princess.

Last night, the Metropolitan Museum of Art hosted its annual Met Ball, providing an excuse for celebrities to show off their incredibly opulent ensembles and post selfies with Kendall Jenner on Instagram.

The theme of this year’s Met Gala was “China: Through the Looking Glass.” While this title was basically an invitation for non-Asian celebrities to show up wearing some kind of bastardized interpretation of “Chinese” clothes, thankfully, there were fewer examples of this than we expected. But we did get this bizarre get-up from Sarah Jessica Parker:

.@JanelleMonae is killing it on the red carpet with a long dramatic cape! #MetGala @ENews pic.twitter.com/mFgPzCzNJV

If these three were intergalactic princesses, then Solange Knowles was the alien—or possibly spaceship?—costar of their Jupiter Ascending–style feminisy space opera.

Solange Knowles dazzles on the red carpet at the #MetGala https://t.co/GMa2g0VSW4 pic.twitter.com/5ir83tf2FD

Offering a twist on the sheer apparel trend, Kim Kardashian, Beyonce and Jennifer Lopez all wore sparkling sheer gowns with fishtail trains. While the women prompted a handful of idiot comments from sexist prudes on Twitter, everyone else was too busy gasping with awe to care.

FKA Twigs chose one of the more refreshingly atypical outfits of the night, a cut-out dress by Christopher Kane. It also had the distinction of being the only gown at the gala to feature a picture of a dick and balls. (They’re visible at the top of the pink thigh slit next to Robert Pattinson, by the way. We know you’re looking.)

.@FKAtwigs and Robert Pattinson are in the building. #MetGala pic.twitter.com/loqNJd2XZl

And just to give the men their due, here’s Michael B. Jordan wearing a subtly embroidered suit and matching iridescent green shoes.

He looks cute, but we’re hoping to see more dudes in Rihanna-inspired capes next year. In the words of Solange: