Are men really sabotaging reviews of TV shows for women?

Or are they just being loud about their opinions?

Men seemingly can’t keep their opinions to themselves, and that’s ruining the IMDB ratings for some classic, beloved TV shows, according to statistics blog Five Thirty Eight. In “Men are sabotaging the online reviews of TV shows aimed at women,” Walt Hickey analyzes the gender breakdown of the reviews of a lot of popular television shows, and finds that men are giving shows classically aimed at women lower reviews. However, is it really “sabotage,” like the headline suggests, or just a matter of different tastes?

The numbers show that men definitely have a harder time praising shows that appeal to women, such as Sex and the City, Gilmore Girls, and Scandal. Men also appear more likely to give a show they don’t like a negative rating, which skews numbers for beloved “female” shows v. “male” shows. “Among shows with 10,000 ratings or more, the average rating of the top-100 male-skewing shows was 8.2, while the average rating of the top-100 female shows was 7.4,” writes Hickey. 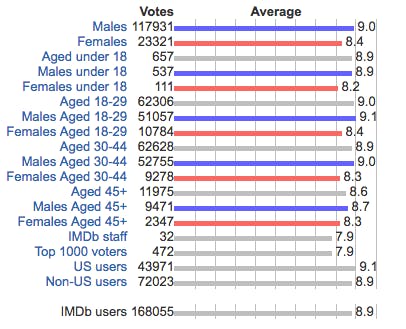 Gender breakdown of reviews for Seinfeld 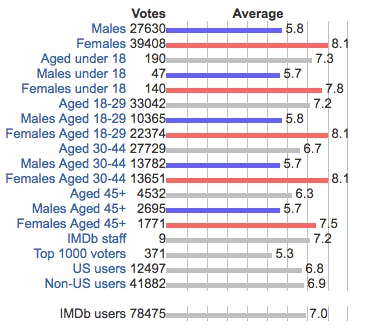 Gender breakdown of reviews for Sex and the City

However, what’s going on here is not “sabotage,” as Hickey claims. Or, it could be, but Hickey doesn’t prove that men are organizing and plotting to bring down Sex and the City’s precious IMDB rating from the outside. After all, plenty of women are rating “male” shows lower than men do. He only proves that men don’t like things that are considered “for women,” and are a lot more vocal about it when given the opportunity to register that opinion.

This is, frankly, no surprise. Hickey does note that men are more likely to participate in public comment forums in the first place, and any woman who has been “actually’d” on the Internet knows that many men often believe there is such a thing as an objective opinion when it comes to art, and that they are the only ones who have them.

Ladies, you can find this gif by searching "mansplain." Works for those on left or right. pic.twitter.com/XZ8J8CyH0R

It’s a behavior that’s common to a lot of interactions where one party has experienced a lot of privilege, and doesn’t understand that art can be made that doesn’t cater to them. Similar reactions abounded from men and white women around Beyoncé’s Lemonade, which specifically deals with black womanhood.

Hickey admits the problem is that distilling complex thoughts into numbers does a disservice to art, and really anything else that gets rated online these days. “They have the habit of lumping the divisive among the universally mediocre,” he writes. “And as long as they purport to underscore the true value of a work, they undermine people’s ability to find new and interesting material just because a subset of passionate and vociferous dudes on the Internet somehow hold it in low regard.”

So men, unless you’re a professional critic who can do the hard work of unpacking and understanding what makes a show enjoyable, well-made, and successful, maybe just stick to reviewing what you like.