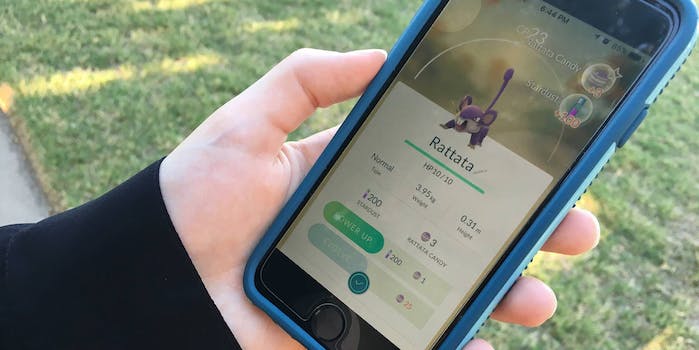 Men are next-level catcalling thanks to Pokémon Go

Let a woman game in peace.

Pokémon Go is now just bringing forth all our regular societal behaviors—the good, the bad, and the unnecessarily aggressive. It seems men are using the game as an excuse to catcall women who are just trying to catch a damn Pidgey.

don't cat call me while I'm playing Pokemon Go, you didn't have my attention to begin with, pig

I JUST WANT TO PLAY POKEMON GO IN PEACE.

DO NOT CAT CALL ME WITH YOUR FRIENDS.

I DON'T WANNA YELL AT YOU HERE.

BUT I WILL IF NECESSARY.

A Reddit thread on r/theredpill is even encouraging men to use the game to pick up women. Normally, that’d be fine—meeting people via participating in a shared interest is kind of a healthy dating tip! But these guys seem to be advocating for Pick Up Artist tactics.

“You’re going to meet a TON of women, likely surrounded by very weak, young, nerdy guys, and approaching them is as easy as pie,” writes the original poster. “All of the hard work, such as breaking the ice, is already done for you. All you have to do is show up and spit your favorite day game.” He also suggests dropping a lure at a Pokéstop and waiting for hot women to show up.

Later in the thread, users rave about the “quality” of women they’re meeting. “I have not seen any stereotypical ‘gamers’ using the app,” writes one. “It’s only been fairly thin and attractive people.” Another thoughtful lad says, “I thought it would just be a bunch of nerdy rainbow dyed haired thick frame triggered glasses feminists playing it. While I have seen plenty of them playing it, I have seen a lot of non-geeky or non-SJW/feminist looking HBs playing it as well.”

However, #NotAllMen are creeps, so not all of them are downloading the game solely so pursue women. Some just really want to play Pokémon Go!

When a group of guys come up behind you and you think they're going to cat call you, but they just ask what Pokemon team you're on.

Pokémon Go: the cause of, and solution to, all of life’s problems.