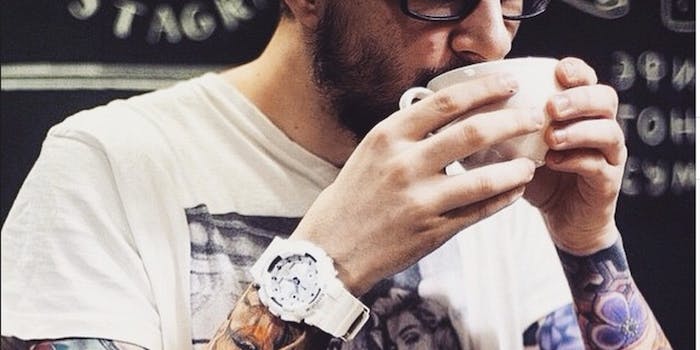 It's the new Men Reading Books.

Let’s be honest—there’s nothing hotter than a hot guy, especially when he’s doing things. I know this is a controversial statement, but hear me out here. Hot guys are really hot, whether they’re reading books and taking their kids to theme parks and maintaining a basic level of fitness or converting oxygen into carbon dioxide. The lure of the hot guy being hot will never die.

That’s why the Instagram account @MenAndCoffee is so popular. Basically, it’s exactly what it sounds like: a carefully curated selection of photos of guys drinking coffee.

@public_images_ltd pulling off denim on denim like a boss! #menandcoffee

Sunday is the perfect day to just let it all hang out.. Check this hilarious pic of #jamesfranco and his silly pup enjoying some coffee! #menandcoffee

There’s also another account directed at lovers of women drinking coffee, the aptly titled @WomenandCoffee. Isn’t the Internet a fun place for us to learn and grow together?