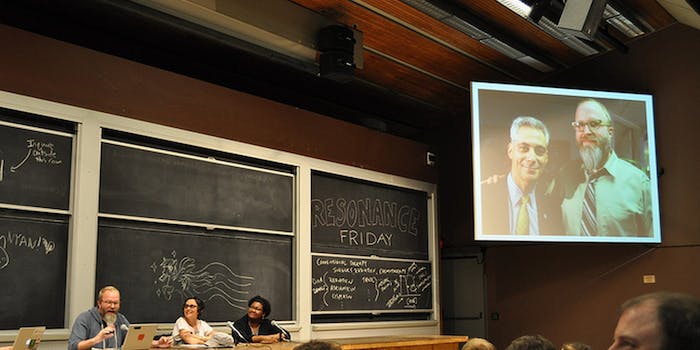 The future is in the memes

“Humor," especially in regards to Internet memes, "allows us to disarm and engage in conversations that we otherwise couldn’t do," Twitter parodist Dan Sinker argued.

Long ago are the days when Internet memes, a form of coded language masquerading as a shared cultural nugget, were described as just “silly jokes from the web.”

Memes now influence how we talk about politics, human rights, gender, prejudices involving homosexuality and race, and even how we deal with rape.

Sinker, who used a parody Twitter account to provide anonymous commentary on the mayoral elections in Chicago, believes the real campaign battlefield of the future will be on the Web. The ammunition for these political campaigns? Memes.

“Humor allows us to disarm and engage in conversations that we otherwise couldn’t do.”

Peterson was inclined to agree, citing the “Shit People Say” series as an example. Hundreds of video creators used that video trope to riff on how different ethnicities, sexual orientations, and genders are perceived and treated by modern society. The videos opened up an Internet wide discussion about identity and also gave marginalized or victimized groups (like rape survivors) a way to participate in critical discussion without alienating audiences.

“Humor is a powerful tool,” said Peterson, who added memes can be “subverted as forms of activism.”

Likewise, Internet defenders and the Occupy Wall Street movement use memes as a form of protest. The hacktivist collective Anonymous has been using memes as a way to protest since 2008. Even if the use of memes by these groups is done purely for spectacle, that doesn’t mean the protest is ineffective or lacks value, Coleman said.

“DDoSing and the lulzes and other stupid things … garner media attention,” but while that can be ineffective on its own, Coleman argued, ultimately, it’s “a very valuable tool in a diverse political kit.”

Is it that surprising that we use memes to communicate political or cultural commentary? In an age of micro-blogging, social status updating, and GIF posting, tightly woven social code like memes are incredibly efficient at communicating complex ideas.