The cake was decorated by an employee with autism, and the woman's graciousness made her day.

She thought it was nothing more than a sweet story about the power of kindness, but one woman’s viral Facebook photo is raising awareness about a corporation’s treatment of employees with disabilities.

Last weekend, Lisa Sarber Aldrich visited a local branch of Meijer, the Midwestern grocery chain, in Caledonia, Michigan. She approached the bakery counter and asked an employee to write “Happy Birthday Mandy” on a cake. The employee did so, and Aldrich thanked her graciously before looking down. What she saw caught her by surprise. 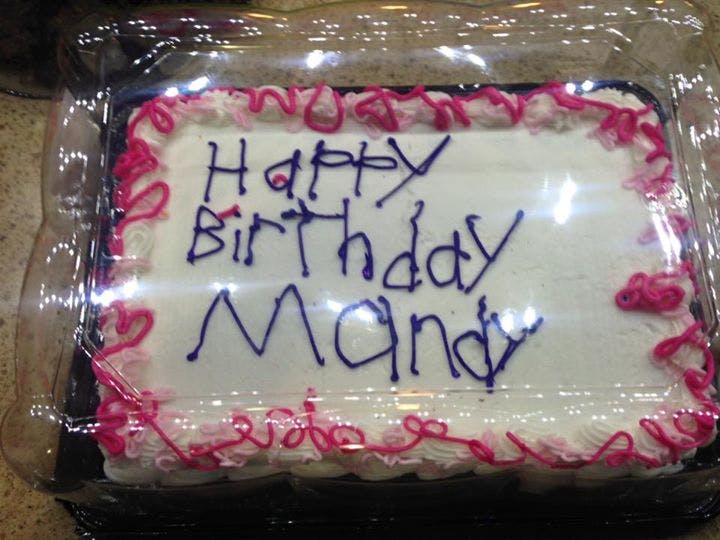 The caption of the photo reads: “Picked out a cake at Meijer. Asked bakery-looking-employee if she could write on it for me. She said she would, and after a long time, she came and presented me with this cake. I looked her In the eye and said thank you before I even looked at the cake. After looking, I nervously laughed and headed to check out- it didn’t really matter to me that it looked so bad- I thought people would think it was funny.”

But other Meijer employees weren’t as compassionate as Aldrich, at least initially. After several cashiers and a manager came by to evaluate the situation, one took Aldrich aside to explain what had happened.

“One cashier put her arm on my shoulder and said ‘the girl who wrote that has Autism. Thank you for smiling and thanking her- even though she’s not supposed to write on cakes, you probably made her day,’” Aldrich wrote.

She closed her post with a simple, but important, lesson: “[T]he moral of the story is that kindness is important!”

Since Aldrich posted her heartwarming message on Sunday, it has gone viral on social media, garnering over 96,000 shares on Facebook. In addition to promoting the message of kindness, the photo is also drawing deserved attention towards Meijer’s inclusive hiring practices.

For over 20 years, Meijer has actively hired and supported their employees with disabilities. In 2014, United Cerebral Palsy awarded the corporation with the “Employer of the Year,” in recognition of “the retailer’s steadfast commitment to diversity while helping people with disabilities reach their full potential through meaningful employment at Meijer.”

Through their This Is My Badge program, Meijer strives to match their employees with jobs that fit their specific skills and physical and mental abilities.

“It’s a very, very team-oriented approach in a lot of the work, and a person with disability quickly becomes part of the team and part of that larger group,” explained Bob Mooney, Group Vice President of Distribution, in a This Is My Badge promotional video.

For her part, Aldrich has been enjoying her cake since she purchased it. In an update posted this morning, she clarified that she is not looking for fame or publicity, only for “people to consider being nice to each other.”

Beneath a photo of the cake (now mostly eaten), she wrote:

1. I am a real person.
2. This is not a Meijer marketing ploy.
3. I never asked for all this publicity, I just wanted people to consider being nice to each other.
4. This is my breakfast today, as it has been since Saturday