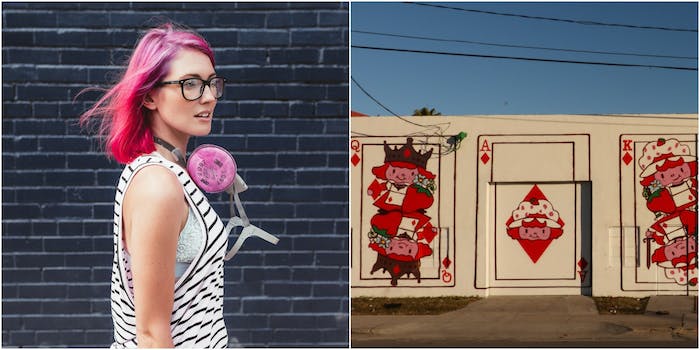 The feminist artist is building a following on nostalgia and real talk.

If Strawberry Shortcake was a woman in her mid-30s, it’s not too far-fetched to imagine she’d be a feminist. After all, she’s not Barbie. She’s got flame-thrower red hair, forgoes fashion for comfortable boots, and hangs out with a pretty diverse girl gang—all of which feels like anti-establishment punk rock to street artist Meg Zany.

“Fuck social norms, do what you want—I just really feel like she would say that,” Zany explains.

A feminist herself, with pink hair to boot, Zany is the physical embodiment of an empowered Miss Shortcake. The 33-year-old uses a sassy interpretation of the 1980s cartoon character in many of her pieces, along with clever words of wisdom such as “Happily ever after is a state of mind.”

“I feel like as we adult, the messages in life are less clear,” Zany says. “When you plugged in to watch TV when you were a kid, you would get cartoons and they would teach you simple life hacks, like don’t be a dick. I just wanted to merge those two—adult sayings, plus dipping back into our childhood loves.”

Zany likes to keep these “simple life hacks” short and sweet on the surface, but her ultimate aim is to create thought-provoking ripple effects inside the brain of anyone who may happen to pass by her art. It’s a huge part of why she became a street artist, and why, more specifically, she’s a stencil artist—the power of visibility and the power of repetition.

Zany is a relatively new kid on the block, making her street art debut just two years ago, but she’s been an artist all her life. She can remember being stuck at train crossings as a kid, and staring in wonderment as the graffitied cars flew by. After working as a recruiter in the aerospace industry for eight years, she couldn’t take the job envy anymore and left only knowing she wanted to paint in her underwear. It wasn’t until she first spray-painted her name in public (fully clothed, mind you) that she realized street art was her calling.

“Being a street artist I have the option to be completely anonymous,” she says. “When I first decided to take my art to the streets, I sat with the question, ‘Do I want people to know the real me and that I am a female artist?’ Much of my time spent in the corporate world, I felt I was two people—the buttoned-up me and the creative me. After some time of pondering, I decided that I didn’t want to hide any facets of me or my personality, and the best way of expressing who I am and how I feel is Meg Zany: I am a burst of energy who does and says crazy yet obtainable things.”

Choosing to use her real name was a risky decision because her path takes a left at the yellow brick road, heads past the tracks and into criminal waters. While not everything Zany paints in public is illegal—for instance, she was commissioned to do the side of a building this past December during Miami’s Art Basel—a good percentage is. That said, the first rule of street art? Don’t run.

Fellow artist WRDSMTH, who was one Zany’s first mentors, shared this gem with her at 4 in the morning in Downtown Los Angeles, minutes before she sprayed her first piece. “Just know that you’re out here and you’re putting up positive messages and this is a good thing,” she recounts him saying.

This, perhaps, is the essence of the line between graffiti and tagging versus street art. While they may use many of the same tools, Zany believes she isn’t defacing; she’s spreading positivity. She’s also very thoughtful about where she puts up her art. “There’s got to be a level of neglect to the wall,” she explains. “I don’t like to just blatantly spray something below, like, a restaurant’s sign. I don’t think that’s really cool.”

Showing her politics and feminism in her art is something Zany’s always considered a no-brainer. She doesn’t hesitate to acknowledge that the street art world is one dominated and mostly populated by men, but she also says she’s never met anyone in the community who’s made her feel less than for being a woman.

“I feel like I’ve found the most sensitive souls through this art medium and I’m really fortunate to be involved with these people that are helping me, I feel, shape the future,” she says. “It’s really incredible.”

Courage Has No Gender, featuring the faces of inspiring women like Amelia Earhart, RuPaul, and Ellen DeGeneres, has been one of her most massive public awareness campaigns to date. Launched in 2016, Zany spread this message around the world, from Portland and Chicago to London and Paris. The public’s response has been a resounding hell yes—and not just from women. The corresponding Instagram hashtag alone shows humans from across the globe nodding their heads in agreement.

“It took me by surprise and really just pushed me to go forward,” Zany says. “I definitely would say that overall I’m fighting for equality of all walks of life. I think we should all have the same jumping off point, doesn’t matter race, religion, anything—here’s the start line, whatever you do with your life, whatever you make with your life, that’s on you going forward.”

More recently, Zany decided to tackle what has proven to be a relevant hot-button issue: mutual sexual consent. She painted a series of vending machines, featuring both men and woman inside, with the words, “Not 4 sale. Consent is always sexy.” Her intent was to put a thought-provoking-yet-straightforward spin on the matter, hoping to get people to move on from shouting angrily about Aziz Ansari and #MeToo’s failings to understanding how this can work in real life.

“What I wanted to introduce is, don’t be gross, you can do this thing and still have fun, and that’s what it really should be,” she explains. “I definitely got a little pushback of people being like, ‘No, consent is always mandatory,’ and OK, we get that, but what’s the next step? Trying to educate or share that with as many people as possible. I love doing that through the streets.”

Zany often worries the intent of her messages will get lost in translation, but engaging in the conversation is all a part of the process. She refuses to be afraid to speak her truths, because if she’s sure of one thing, it’s that nothing goes according to plan, so plan on that. It’s thanks to her social media accounts, Instagram in particular, that she’s able to connect with people after the fact and witness the impact her art is having.

And sometimes it’s her least-suspecting pieces that have the largest effect. In Lyon, France, for example, she painted a Strawberry Shortcake reminding viewers, “You’re the victims of your own rules,” in what she thought was a tiny, out-of-the-way alley. It’s turned out to be one of her most photographed pieces.

She was even commissioned to recreate the art for a couple’s personal collection, because this particular piece was such a huge part of their love story. “It’s amazing to be able to have someone share those stories with you,” Zany says. “I never thought in a million years that would be the message that I would receive back.”