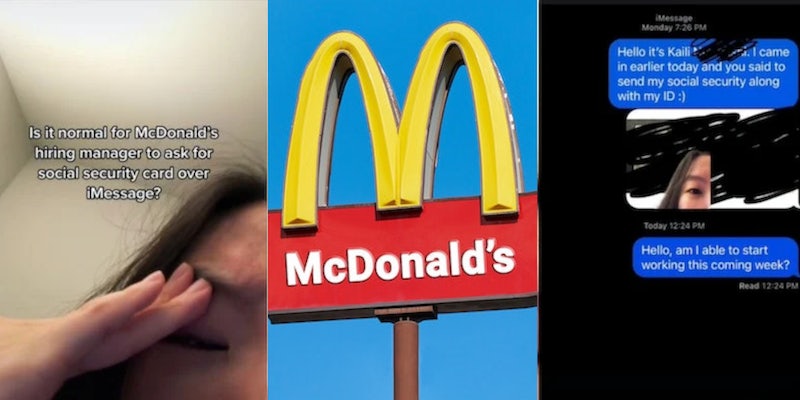 ‘u rlly got ur identity stolen over a job at McDonald’s’: Hiring McManager asks for social security number over text

'She just left me on read, and now I’m kinda f*cking freaking out.'

In a panic, TikToker Kai (@thatonegirltthathates) took to the platform and asked her followers if it was normal job procedure to send your social security number through text message.

The now-viral video revealed that this is a common, though considered unprofessional, practice when hiring in fast food chains like McDonald’s, Taco Bell, and Sonic, according to users in the comments section.

“Okay I’m freaking out, I don’t know if I should be or not,” Kai says at the beginning of the video. “Can someone please tell me if I’m going crazy?”

The creator explains that she applied for a job at McDonald’s on her school campus three weeks prior and got confirmation that she was hired. Upon not receiving any further communication, Kai repeatedly went inside the restaurant to ask about her schedule.

After finally talking to the hiring manager, she was told she could start within two days of sending over her social security number and I.D.

“I sent it to her and then she just left me on read, and now I’m kinda fucking freaking out,” she says in the video. “Should I be worried? I’m fucking scared.”

In the comments section, some users offered advice while others berated her for sending personal information over text.

“u rlly got ur identity stolen over a job at McDonald’s,” one user commented.

“WHY WOULD U SEND A PHOTO OF YOUR SSN,” another said.

“It’s normal for an employer to ask but the way the manager asked to send it via message is highly unprofessional,” a third user commented.

Five days later, in a second video, Kai is wearing her McDonald’s uniform.

“Apparently everyone sends their social security number, like a picture of it, to your boss over text anyway, and it’s normal or something,” she says.

Viewers in the comments urged Kai that next time, she should write down her social security number in person.

“No girl I have NEVER sent a picture of my ssn you literally should be filling it out ON the application and they should have it that way,” one user commented.

“It’s [definitely] not normal, just be happy nothing happened,” another said.

The Daily Dot reached out to Kai via Instagram direct message and McDonalds via email.