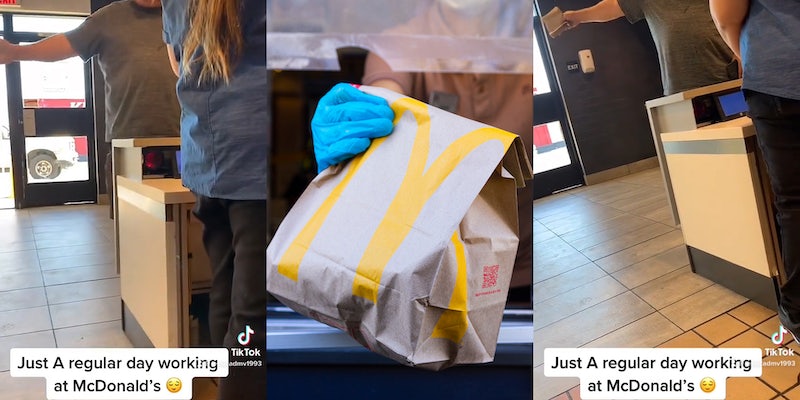 ‘Get your head out of your a**’: Male ‘Karen’ berates McDonald’s workers for forgetting to put napkins in his bag, sparking debate

In a viral TikTok video, a McDonald’s customer goes off on the manager and workers for forgetting to put napkins in his food bag.

User @jessicadmv1993 films the altercation from a distance behind the counter as the customer unleashes his anger on the McDonald’s workers.

“You guys better get your head out of your ass,” the customer says to the workers. “You gave us all of this food and everything and not one napkin.”

The customer directs his anger toward the manager, going off about how she “should be smart enough to make some of [the employees] do [their] job.”

The manager and worker calmly ask if he needs napkins, and eventually try to calm him down but the customer was relentless, saying how if he would’ve driven off to pick up his kid with no napkins in his bag he would’ve gotten messy. One of the workers tries to jump to the manager’s defense only to be told by the customer to, “shut up. I’m not talking to you. She’s the manager, I’m talking to her.”

Essentially, he starts talking about how he has owned a business for 27 years and that the manager is in charge to make sure the other employees “don’t screw up.” This is apparently a common occurrence, according to the customer, saying they already had “five mistakes at the drive-thru.”

“Smarten up,” he says as he storms off.

In the text overlay, the creator wrote, “just a regular day working at McDonald’s.”

The video amassed over 143,000 views since it was posted on Jun. 29, with most not understanding why the customer was angry over napkins.

“Just ask for napkins and calm down,” one person commented.

“All this because of napkins?!!! “ a second asked.

“A little over the top just because you’re missing napkins. Once the foul language and name calling started he lost all credibility,” another stated.

Some even shared how they stock up on napkins. “AMATEUR, that’s why I have napkins in my center console! Like happens!” one wrote.

However, there were people who sided with the customer, claiming McDonald’s has a tendency to mess up often.

“I mean McDonald’s do kinda f up our orders all the time,” one person said.

“McDonald’s really does have this problem. Or when you order 2-3 meals for your family and no ketchup or napkins. Like seriously,” a second agreed.

“Naw cause this is an actual problem. Not only McDonald’s but a lot of fast food restaurants don’t give out napkins it’s frustrating,” a third wrote.

“He stating facts, they never give you napkins, ketchup or sauces even tho you ask at speaker. then they get mad when you check at window,” one wrote.

To that, the creator replied, “Even after client has all their food/drinks we just try to do our job man.”

Although it’s unknown which McDonald’s this incident took place in, a new law was passed in California about the distribution of condiments at fast-food restaurants. According to City Journal, a law was passed in California in 2021 where napkins, straws, and other condiments must be requested, applying to both dine-in and take-out orders. Assembly Bill 1276 prohibits “a food facility from providing any single-use foodware accessory or standard condiment, as defined, to a consumer unless requested by the consumer.”

Update 3:34pm CT, Oct. 4: When reached for comment, Jessica (@jessicadmv1993) told the Daily Dot the incident occurred in Tucson, Arizona. Jessica said the man got upset over his coffee being made wrong, and then there were no napkin in his bag. Jessica said that while the man has visited the location before, he hasn’t been back since the incident.

The Daily Dot reached out to McDonald’s via email.