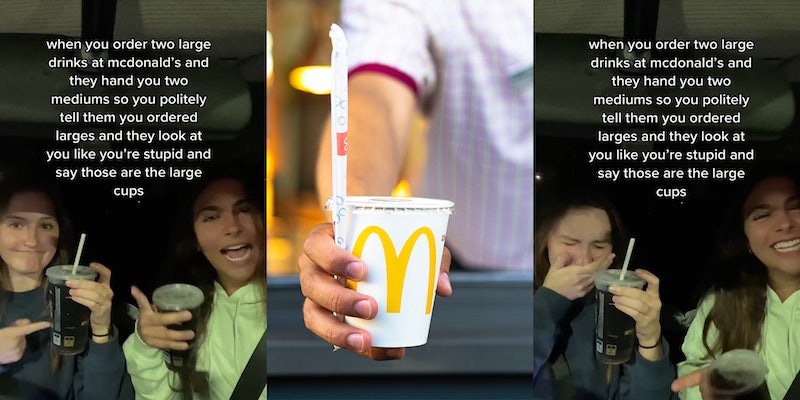 ‘This happened to me at Taco Bell’: McDonald’s customers claim workers gaslit them over drink size

'I’m a manager at mcds… that’s a medium soft drink cup. it’s a large for mccafé. so you’re right.'

For some reason, there’s a growing suspicion on social media about the veracity of the portions patrons are receiving from fast-food establishments. Chipotle is usually at the center of these claims. However, TikToker @elerikhan is giving the chain a break on the platform by bringing McDonald’s into the mix with one her latest videos.

In a clip posted on Sept. 23, @elerikha wrote in the text overlay: “when you order two large drinks at mcdonald’s and they hand you two mediums so you politely tell them you ordered larges and they look at you like you’re stupid and say those are the large cups.”

In the video, @elerikha sits in a car with a companion as they laugh and hold up their fountain drinks for about eight seconds before the footage cuts out.

cannot make this up

Commenters offered up their own explanations as to why the customers received the cup size they did. Some speculated that if one orders a large smoothie or iced coffee (or any other McCafé drink), then they get a smaller “large” cup. And if they order a fountain drink, they get a larger “large” cup. This appears to be confirmed by other outlets, as McDonald’s indicates its large iced coffees contain 22 ounces of liquid, while its medium fountain soda contains around 21 ounces of liquid.

“I’m a manager at mcds… that’s a medium soft drink cup. it’s a large for mccafé. so you’re right,” one commenter wrote.

The TikTokers’ drinks appear to be fountain drinks. So, according to this, they’d receive a the larger cup of the two large sizes.

“Me at sbux when i was like i ordered cold foam and she was like it’s there, girl i see no white foam wdym,” one said.

“This happened to me at Taco Bell like they rationing or what,” another shared.

The Daily Dot has reached out to @elerikhan via TikTok comment and McDonald’s via email for further information.