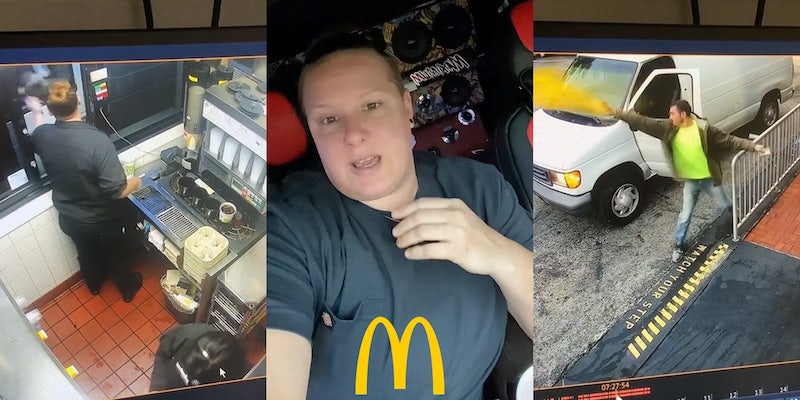 ‘What did the cone do to you!!?’: McDonald’s worker shares ‘abuse’ from customers that made her quit

'Without even thinking, I grabbed the Sprite that should've been his and threw it at him.'

In a viral video with over 15.7 million views, TikToker Brandy Richards (@saggiebeach) shared security footage from the McDonald’s she worked at of an angry customer throwing a “caution” cone.

“When people ask, why did you leave McDonalds? #theabuse,” the caption said. “What did the cone do to you!!?” she said.

@saggiebeach When people ask, why did you leave McDonalds? #theabuse What did the cone do to you!!? 🤣🤣🤣 #mcdonalds #funny #fypシ #violenceisnottheanswer ♬ OMG – White Gangster

The video begins with Richards going up to the drive-thru window and handing the customer their receipt. The man then throws the receipt back threw the window at the employee, prompting Rodgers to throw a cup of Sprite at his van.

After the interaction, the clip switches to show security footage from a camera placed at the exit of the drive-thru. The upset customer got out of his van, picked up a caution cone, and threw it into the parking lot.

In the comments section, users were confused about what caused the man’s reaction and why he threw the cone.

“He thought a floor sign was enough to hurt their feelings,” one user commented.

“I wonder if these people ever come across these videos and feel embarrassed for their behavior,” another said.

“And they do that for what? I never understand why people have to be rude,” a third user commented.

In a follow-up video, Richards provided context to the video after several users asked for the backstory.

“The cone is still in therapy,” she joked in the caption.

She explains that the woman who had originally taken the man’s order was new and in training, and kept asking the customer to repeat himself as she couldn’t hear. He allegedly got upset and started cussing at the employee, according to Richards.

“I told him to go to the first window,” she says. “I took his order. He was really nice to me and as he was driving away, he kept saying ‘tell that bitch to start listening.’”

Richards apologized for the inconvenience, however, she says the customer then began cursing at her. The creator told the front of the kitchen not to give the customer his food.

At the final window, Richards says she then processed his refund, but the customer threw the receipt back at her, marking the beginning of the security footage clip.

“Without even thinking, I grabbed the Sprite that should’ve been his and threw it at him and it hit the side of his van,” she explains. The first video she shared was the result of her actions.

Richards says customer reactions were a regular occurrence at McDonald’s—minus the cone throwing.

“I’ve been followed after work, I’ve been threatened, I’ve had things thrown at me…I’ve been nearly stabbed,” she claims.

The TikToker explains that the original video took place about two years before she left the company, which she had been working with for 20 years. At that point, she says she was over the mistreatment.

The Daily Dot reached out to Richards via Instagram direct message and McDonald’s via email.