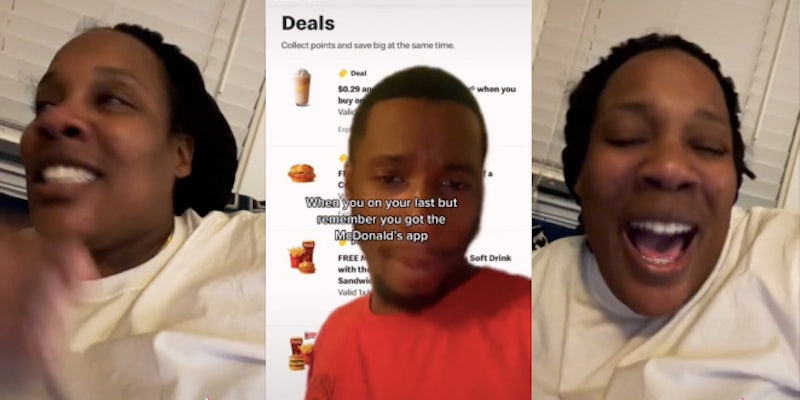 ‘I know they sick of us’: Customer says she feels shamed by McDonald’s workers for using app

'Give me my 99-cent Iced Caramel Coffee.'

A McDonald’s customer is urging workers to express their opinions on customers who use the app, which is known for stellar deals, after feeling judged by employees when using it.

TikToker @sam__bee stitched another user’s TikTok, in which that user lauded the app for offering good deals.

“I need a McDonald’s employee to hop in because I know they sick of us. What do have to do when they be like, ‘You using the McDonald’s app?’ Yes, the fuck I am. Give me my 99-cent Iced Caramel Coffee,” she says.

Inflation in the United States has reached a 40-year-high, and supply chain issues have resulted in increased product prices, with many folks lamenting the fact that some of their favorite items and commonly-made purchases cost more than they’re used to paying. It doesn’t help that the overall cost of living has also increased ever since the pandemic. It was reportedly easier to purchase a new home during the Great Depression than it is today.

So folks are excited about the opportunity to buy food from the franchises they love at a discount, but that doesn’t mean they need to snip through Valpak coupon booklets. Various chains have deals built into their apps that offer a variety of exclusive discounts for customers—as long as they’re willing to keep the app installed on their device.

A big criticism folks have had of fast-food chains like McDonald’s is that the “dollar menu” has all but disappeared from its menu. However, it appears that the popular restaurant has migrated all of these perks to its McDonald’s app in an effort to get more users to embrace the software it developed.

As of July 2021, McDonald’s app had a whopping 47 million users and hit some impressive download benchmarks, according to Reuters. For instance, in August of 2021 alone, Mickey D’s clocked in 3 million new downloads of its app, according QSR. This number is reflected in the sheer number of reviews its app received in the iOS App Store: 1.1 million to date.

The brand’s app has been lauded for many of the perks it offers patrons: Folks can routinely get free menu items, such as an order of fries or a free McChicken when they make a qualifying purchase. These are separate freebies from its perks system, which awards customers points contingent upon the frequency and amount of money they spend at the chain. These points can then be submitted for the inclusion of other free menu items that are grouped by different tiers at the chain.

TikTokers who saw @sam__bee’s post said that they happily use the app. Other apparent McDonald’s workers shared the real reason why they are disgruntled.

“We not mad you use the app we made that your don’t give the code at the speaker,” one said.

“Sometimes the codes don’t work and people make fits over it which slows us down,” another said.

Some customers argued that employees have never given them a hard time when using the app.

“No employee ever made a fuss to me idk which mcds yall going to,” one said.

The Daily Dot has reached out to McDonald’s via email and @sam__bee via Instagram direct message.