He compared the president to an orangutan and implied he should be lynched.

The town council of West York, Pennsylvania, voted to accept the resignation of Republican Mayor Charles Wasko on Monday after he had made several racist Facebook posts in reference to President Barack Obama.

The first post in question was a photo of orangutans in a “Kenya or bust” wheelbarrow, with the inlaid text “Aww…moving day at the White House has finally arrived.” The second implied the president should be lynched: “Barry, this rope’s for you,” the caption read in an image of Clint Eastwood. 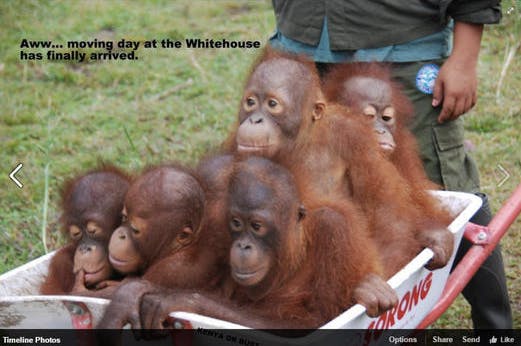 Earlier this month, the town council voted to oust Wasko, though it technically didn’t have the power to do so. Wasko said he’d hand in his resignation, but only under several conditions, including hiring a new police sergeant, which was allegedly already underway.

While reading a motion to remove Wasko from office, Democratic Council President Shawn Mauck, who will take over as mayor, said, “Sadly, West York lately has been known primarily for one thing: what residents call ‘their racist mayor.’”

Wasko told Harrisburg station WHTM that he did not regret the racist posts. “The racist stuff, yeah. I’ll admit I did that, and I don’t care what people label me as.”

According to Mic, Wasko has been posting racist images and messages for at least as far back at August 2015, including ones claiming Muslims were pedophiles and blaming gun control for the Holocaust.