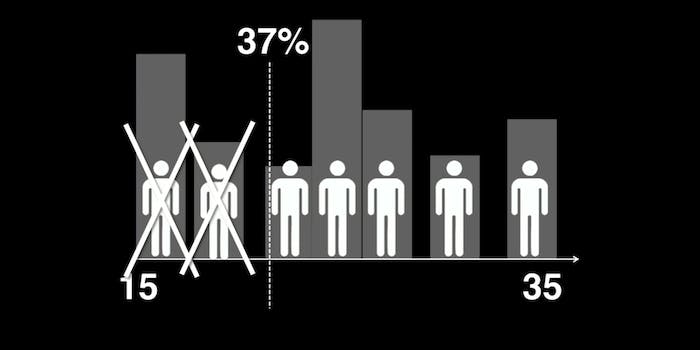 Can math predict the success of your romantic relationships?

And you thought you wouldn’t need math in the real world.

We use math to bring order and organization to many aspects of our lives. But love, lust, and relationships tend to be touchy-feely, driven by instinct, and totally unquantifiable.

Or are they? Dr. Hannah Fry of the University College of London suggests that perhaps they aren’t in this Tedx talk:

In delivering three “mathematically verifiable tips for love,” Fry tries sum up how you can play the odds on love.

But it’s important to note that most of what Fry says here is tongue-in-cheek. Her mission with this talk is to demonstrate the fun ways that mathematics can be applicable to our everyday lives. But most of the math she shows us is imperfect, not predictive, and derived from incomplete data sets. Let’s unpack:

The OkCupid study about your attractiveness to message ratio she mentions can be read in full here. It came from OkTrends, OkCupid’s blog where they would publish and analyze data from OkCupid users. It’s full of interesting and fun infographics but let’s remember that all the data here comes from a large but incomplete data-set. That is to say, OkCupid users are self-selecting. There may be many invisible variables that drive certain people to seek out online dating, and then to choose to use OkCupid among the many dating sites available to them. Those invisible factors may skew the data results.

The second tip Fry talks about is simply using an economics equation called the optimal stopping theory. While it’s an interesting idea, Fry also mentions the several pitfalls of using such a theory when picking a spouse.

Lastly, there’s the prediction equation for divorce. While a 90 percent success rate is compelling, this equation is not actually a predictive model. Rather, the psychologist who came up with it, marriage researcher John Gottman, developed the model based off of couples whose outcomes he already knew. That is, he collected data from couples before and after they got divorced, and then came up with a statistical model that fit the data.

Laurie Abraham writes in her book, “The Husband and Wives Club”:

What Gottman did wasn’t really a prediction of the future but a formula built after the couples’ outcomes were already known. This isn’t to say that developing such formulas isn’t a valuable—indeed, a critical—first step in being able to make a prediction. The next step, however—one absolutely required by the scientific method—is to apply your equation to a fresh sample to see whether it actually works. That is especially necessary with small data slices (such as 57 couples), because patterns that appear important are more likely to be mere flukes. But Gottman never did that. Each paper he’s published heralding so-called predictions is based on a new equation created after the fact by a computer model.

That said, Gottman has made many good contributions to marriage research, not least of which is understanding and quantifying the way couples communicate. Whether or not those methods of communications are definite predictors of relationship success, as Gottman suggests they are, is up for debate. But understanding them is nevertheless helpful to understanding how marriage and relationships thrive or dissolve.

So if someone says they can quantify your relationship, take it with a grain of salt.