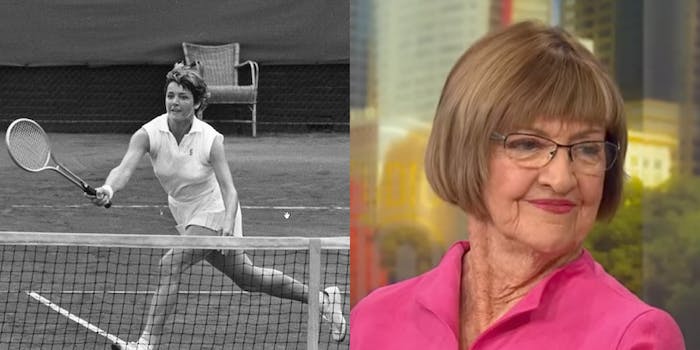 Tennis legend says the sport is ‘full of lesbians’

The tennis community is calling for Margaret Court’s name to be stripped from her namesake tennis arena after the Australian Grand Slam legend said that “tennis is full of lesbians.”

According to the BBC, Court, now a Christian pastor, told Vision Christian Radio that transgender children were the work of “the devil” and alluded to top players using lesbianism to corrupt young players, much like Hilter did with Naziism.

“When I was playing there was only a couple [of lesbians]. But those couple that led took young ones into parties and things. What you get at the top is often what you’ll get right through that sport,” Court said. “That’s what Hitler did and that’s what communism did, it got the minds of the children.”

Court also said she refuses to fly with Qantas Airways when possible in order to protest its support of gay marriage.

While other Grand Slam winners Martina Navratilova and Billie Jean King have called for Court’s name to be stripped from the Margaret Court Arena, the venue of the Australian Open in Melbourne, Tennis Australia stated earlier this week that the venue name will not be changed, BBC reported.

Andy Murray, currently ranked no. 1 in the world for men’s singles tennis, said at the French Open that he hoped the controversy could be resolved before next year’s Australian Open. Sam Stosur, formerly ranked no. 4, also insinuated that tennis players might refuse to play at next year’s Open because of Court.