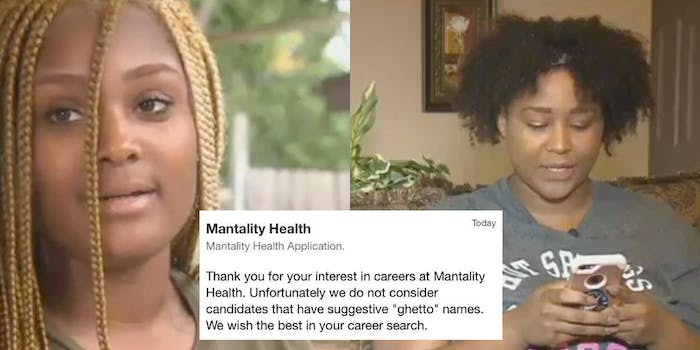 Looking for a job can be a job within itself. Between networking, updating your resume and cover letters on job search sites, following up with applications, and wondering if a company is going to ghost on you, applicants invest tens of hours on finding a new gig alone.

So to be told that you won’t be considered for a position because you have a “suggestive ‘ghetto’ name” is not only racist, discriminatory, and wrong, but also an immense waste of time.

On Monday, Hermeisha Robinson posted this exact response to Facebook, sent to her via email from a company she applied to in the St. Louis Area. A representative from Mantality Health, a multi-location company that helps men with low testosterone, wrote to Robinson, who is Black, about the customer representative job she applied for, telling her she would not be considered as a candidate because of her “suggestive ‘ghetto’ name.”

“We wish the best in your career search. Regards,” the email signed off.

After receiving the email, Robinson shared a screenshot of it to Facebook and wrote that she was upset and very hurt because she knows she was qualified for the position. She urged people to share her post and show others that discrimination such as what she faced needs to stop.

“…They even got me second guessing my name trying to figure out if my name is really that ‘ghetto,'” Robinson wrote.

Robinson wasn’t the only applicant who received that response. On Tuesday, Dorneshia Zachery, who is also Black, told local CBS affiliate KMOV 4 that she received the same email from Mantality Health, telling her that her name was “ghetto” and that they don’t consider candidates with such names.

“The company looked at my name and said we don’t care about what you’ve done in life your name is going is going to dismiss you completely,” Zachery told the news station.

A Milwaukee woman, Quinntellia Fields, shared a similar post on Facebook saying she too was rejected by Mantality for her name, the Riverfront Times reported. A fourth woman, who posted on Robinson’s Facebook post, said that she too received the email.

“2018 and times STILL haven’t changed,” Fields wrote in her post.

Jack Gamache, the clinical director of the company’s St. Louis Area locations, told the station that the message was sent after the company had been “hacked.” Its system was not compromised, Gamache said, but its Indeed account was, which is the service the women had used to apply to the position.

Mantality Health CEO Kevin Meuret estimates that 20 people got email responses similar to Robinson’s and Zachery’s. He said that the employee whose name is mentioned at the bottom of the email had nothing to do with the messages sent. That employee, Jordan Kilmer, has since deleted her social media accounts, the Times reported.

“This is not a reflection of who we are as a company,” Meuret told the station. “This is deplorable.”

On Facebook, some have come to Robinson’s support. But despite several local publications having covered Robinson’s and Zachery’s stories of the emails, many commenters on Facebook have accused Robinson of fabricating the email and making up her account.

“What I don’t understand is why would I publicly humiliate myself? About a name that I was given?…Even though you see news articles and media post, yet you still call me a liar,” Robinson wrote in response to the criticism. “My feelings are very hurt and you people not making it no better for me about this situation by making fun of my name…”

Chesterfield Police are investigating the “hacking” on the possibility that a “disgruntled employee” sent the responses, but Indeed says it has no proof that the Mantality Health Indeed account was compromised. In a statement, Indeed told the station that it recommends frequent password updates and password confidentiality to clients.

Robinson did not respond to the Daily Dot’s request for comment.