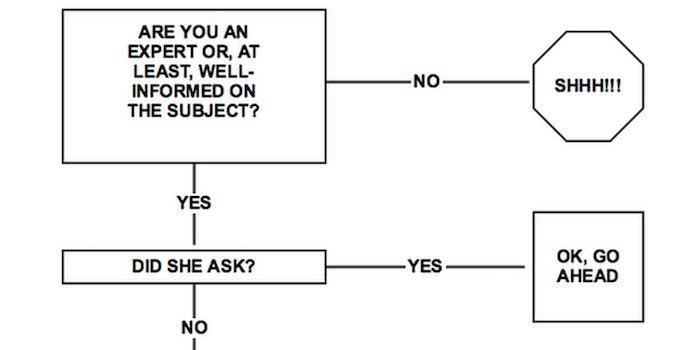 Something was misinterpreted online. Can you believe it?

When a man decided to explain to Elle Armageddon the difference between ascending and descending street numbers, she decided she’d had enough.

The interaction inspired her to draw a simple flowchart showing when it is and isn’t OK to give unsolicited information. She then tweeted the chart, and it was subsequently (and unsurprisingly) completely misinterpreted by people on the Internet.

Should You Explain The Thing To The Lady?

The chart has been retweeted hundreds of times, and has resonated with many women who have been so-called “mansplained” too many times. But according to Armageddon, it wasn’t meant as an attack on men.

“The flowchart doesn’t actually pertain specifically to men, but I have noticed that a disproportionate number of unsolicited (and often inaccurate) explanations bestowed upon me do seem to come from men,” she told the Daily Dot in an email.

Armageddon, a 30-year-old Oakland, California, resident, says she does legal and medical support work for activists, anti-surveillance and privacy advocacy and education, and operational security education. She writes a blog about her work called Totally Not Malware, and says that people (“especially men”) even try to explain her own posts to her.

#ProTip: if you're a man explaining to me how I should handle men explaining things to me, you're not actually helping.

“When a friend of mine expressed frustration over an unsolicited and uninformed explanation being foisted upon her the next day [after the numbers incident], I spent two minutes drawing a flowchart in response, thinking it was something we’d both get a quick laugh out of,” she explained.

But no sooner did she post the tweet than her mentions were flooded with responses from men who found the chart to be a personal attack on the nature of the Internet and its status as a place for a free exchange of ideas. In other words, they mansplained.

@OaklandElle That's not how a discussion works, on the web even more. I'm sorry if I sound rude or something but that's my opinion.

@OaklandElle @Exessen in what context is being explained anything an issue? I don't get the starting point. But I understand the sentiment.

@OaklandElle @tylersiprova Oh, so as a teacher, I cannot repeat the stuff to ladies, only to gentlemen? That would be sexist? :(

Some of them decided it was their duty to explain her chart to her.

@amandareid @OaklandElle Why do you keep insulting? I've explained why I don't think the flowchart works well, you have not.

Perhaps most ridiculous of all is the fact that the words “man” or “men” do not actually appear on Armageddon’s chart. All the attacks are based on an inference that the instructions are targeted at them. You mad, bro?

Armageddon says she really didn’t expect something she threw together so quickly would cause such a stir. “When I shared the chart, I honestly had no idea it would strike such a chord with people,” she told the Daily Dot. “The way it has been interpreted repeatedly to be an attack on men, or specific to men, without making any mention of men is actually really interesting to me.”