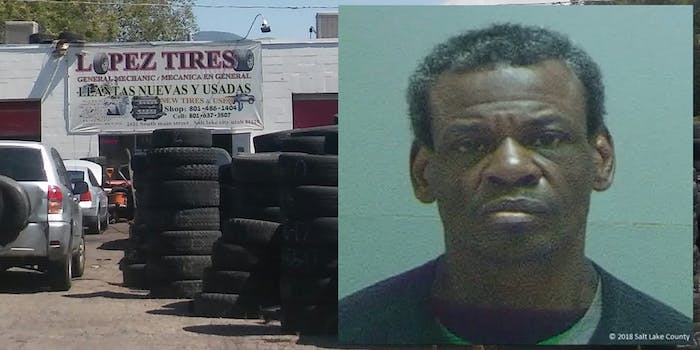 A Utah man will not be charged with a hate crime after he severely beat a Mexican American father and a son in Salt Lake City, Utah, while allegedly shouting “I fucking hate Mexicans.” He will be relieved of the charges due to a legal loophole in Utah laws that recognize hate crimes only as a misdemeanor.

Alan Dale Covington, 50, went into the Jose Lopez’s tire shop last Tuesday morning, where Lopez was working with his 18-year-old son Luis Gustavo Lopez. It was before Jose could even finish heating up his breakfast that he heard his son scream in the garage.

When he came out, he saw Covington hurling racial slurs at Luis, the Salt Lake Tribune reported.

“Are you part of the Mexican mafia?”

Covington eventually struck Luis in the face when he was trying to protect his father, knocking the teen unconscious, and continued to beat him, according to the Tribune.

Covington left when Jose’s brother came to see what was happening and ended up scaring him. Covington was soon arrested and has been booked at Salt Lake County Jail.

Jose was severely injured and received eight stitches. Luis had the right side of his face “shattered” and had a titanium plate implanted to “keep his eyeball in place,” according to a GoFundMe page set up for their medical bills.

The page, set up by Veronica Lopez who identified herself as Jose’s daughter, surpassed its goal of $20,000 and had generated nearly $50,000 in funds as of Monday morning.

Veronica said in her post that neither her brother nor her father had health insurance. She did not respond to the Daily Dot’s request for comment.

Covington has since been charged with two felony counts of aggravated assault and other counts of weapons possession. But due to a loophole in Utah’s hate crime statute, he is not being charged with a hate crime.

The current law only counts hate crimes as a misdemeanor, essentially meaning, for this to be considered a hate crime in Utah, the felony charges would not be counted, Salt Lake County District Attorney Sim Gill explained.

“This is an insult to the injury to what is otherwise a serious crime,” he told the Daily Dot. “Hate crime is qualitatively different and hate crime legislation tries to proportionally recognize that so we can give a measure of justice to the kind of crime it is.”

The legislation Gill is referring to is the state’s “Victim Targeting” bill, which would allow judges to increase penalties of hate crime offenders. It was stalled earlier this year, for the third time in a row.

Gill is not alone in his views. A Tribune editorial last November termed the current statute “toothless” and called for the state to “step up” its actions regarding hate crime laws, citing increasing hate crimes in the state and the country overall. According to the FBI database, racially motivated hate crimes ranked the highest number of hate crimes in 2017 in Utah.

“I don’t know what the fear in my legislature is, what I do know is that there are many communities out there that are not getting a measure of proportionate justice for the nature of these crimes that are being committed in our society,” Gill told the Daily Dot. “And that is a legislative failure.”