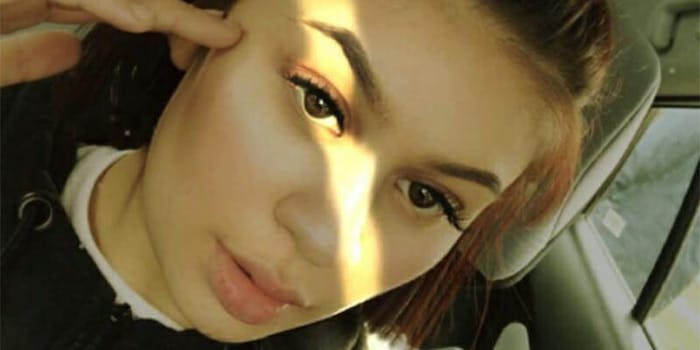 He bragged that 'she died while having sex with me.'

A 19-year-old from Washington state was arrested Thursday after he reportedly raped a teenager as she was dying from a drug overdose, took pictures of her unconscious body, sent them to his friends, and then put her body in a plastic tub before leaving to work, BuzzFeed News reported.

Brian Roberto Varela was arrested in Lynnwood after his co-workers called police saying Varela bragged about having sex with 18-year-old Alyssa Mae Noceda, whose mother had posted to Facebook that she was missing. According to police reports, Varela used the teen’s “dead thumb” to unlock her phone and post on her Snapchat to make it look like she had run away.

Varela, who was known to sell drugs, reportedly gave Noceda a “large line of Percs” (painkillers) and liquid THC during a party at his mobile home, causing her to collapse and go unconscious. Varela then raped Noceda, and according to friends, he “did not know if she was alive or dead when he ejaculated into her.”

Jayson Pepito, Varela’s friend, said he was in a group chat where Varela sent photos of Noceda naked and unconscious on his bed.

“LOL I think she od’d, still breathing,” a text from Varela reportedly said. “I’m smashing her to pass the time.”

Varela also reportedly bragged to Pepito and said, “She died having sex with me.”

According to police, Varela then went to bed because he was “too tired” to take Noceda, who he thought might still be breathing, to a hospital. When he woke up, she was dead, and he left to work for a double shift at Dairy Queen. There, he told co-workers that he had broken Noceda’s legs to put her body in a plastic tub. His co-workers then found a Facebook post from Noceda’s mother about her missing daughter.

My daughter Alyssa Noceda has passed away. Thank you for all your help.

Varela—who had reportedly “researched” on his phone how to get rid of a body and thrown away Noceda’s phone after updating her Snapchat—was arrested on suspicion of manslaughter, homicide by controlled substance, and second-degree rape.

BuzzFeed News reported that Noceda’s mother, Gina Pierson, has been posting photos and videos in memory of her daughter on Facebook, where people have commented that the teen was a “firecracker” and “bright and headstrong.”

A GoFundMe set up by Noceda’s aunt to raise money for her memorial and funeral had raised $4,700 of its $5,000 goal by Friday afternoon.