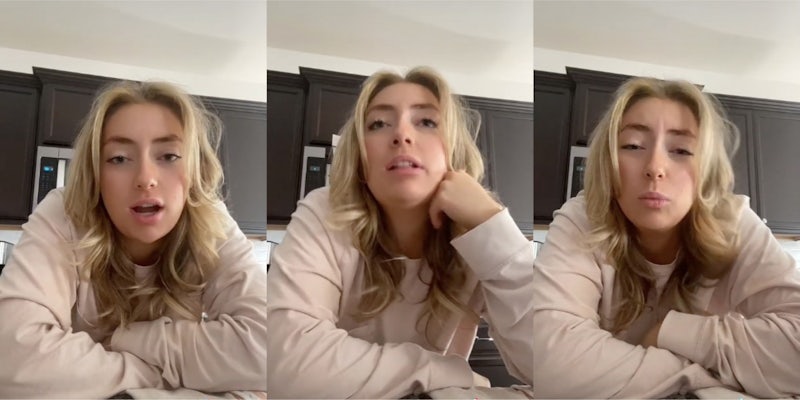 ‘I just wanted to break the stereotype of men paying for the first date’: Woman says date asked her to split the bill even though he claimed to make $100K a year, sparking debate

'It's a red flag for me when they mention anything money-related during the talking stage.'

TikTok user Alexandloveland (@user774045) went viral after posting about a first-date experience she had with a man who invited her out to dinner. In the clip, Alex says the man asked her to pick a restaurant and later then requested that she split the bill with him.

“So, he asked me for dinner and I said ‘OK,’ so he goes, ‘yeah, pick wherever you want just not somewhere where the drinks are $30,” Alex starts in the clip. “He said it like that, I was like ‘OK cool. We’re young some people are saving not everyone has a lot of money I don’t really care about that stuff.'”

Alex continues that at the end of the night, after two drinks and an entree each, the bill came up to $90.

Alex explains in the video that she had no issues with his request until later in the night when he informed her that he earns $100,000 a year at his job but the only reason he asked her to split the bill is that he wanted to rally against the “stereotype” of men covering the cost of outings with women.

“Like hours hours hours later, he goes, ‘oh, just so you know I make like a $100,000 a year, you know I have lots of money,'” the man allegedly said. “‘I just wanted to break the stereotype of men paying for the first date.’ Why are you lying?”

A Psypost article writes that while attitudes towards who should be covering the cost of dates and outings in hetero-normative relationships are shifting, a majority of folks still believe that men should be the ones to cover the cost of a first date, and still should be paying more than women in subsequent outings afterward. Although the wage gap between men and women in the U.S. is getting narrower as years progress, women still earn 83 cents for every dollar that men collect on average. This wage gap is often cited as an argument from folks as to why it’s expected of men to pay for most, if not all, of a first date.

Another argument can be made that the invitation of going out with someone carries an implied social understanding that they are going to be the one to cover the cost of the said meal, but as Alex says, she didn’t have any issue with the fact the man requested the bill be split. More so it’s that she felt he was “lying” about the amount of money he brings in yearly.

TikTokers had a variety of different opinions on Alex’s date, with many offering up different reasons as to why he was in the wrong for even asking her to pay in the first place.

“It doesn’t matter how much he makes. He asked you out, he pays. First red flag is him telling you to pick somewhere with drinks less than $30,” a top comment read.

“Didn’t he ask you out? In that case he should pay,” another agreed.

“He shouldn’t date then!” a user wrote. “$90 for two entrées and four drinks is extremely reasonable. I don’t know what he expected!”

“it’s a red flag for me when they mention anything money related during the talking stage,” one user commented.

However, others argued that $100,000, especially because the U.S. is facing its worst inflation rates in 40 years, isn’t that much money. Others said that they earn six figures a year and still think a $90 restaurant bill is a lot.

“$100k a year after taxes isnt that much esp depending where you live,” a user argued.

“To be fair I make 6 figure and still cringe at a 90 dollar bill. But that is what it costs now,” another wrote.

“100k is nothing these days,” a user concurred.

The Daily Dot has reached out to Alex via TikTok comment for further information.