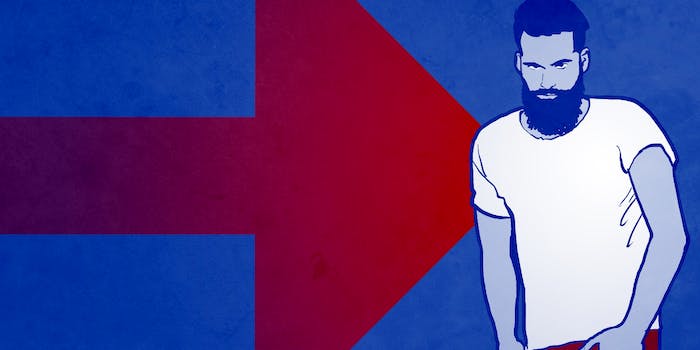 Men are not OK, need to be reassured they’re #ManEnough4Hillary

It's cool, guys, you can vote for a woman.

Are you man enough to vote for Hillary Clinton? That’s what a new hashtag campaign asks, because the most important thing to consider when voting is “Will my masculinity remain intact?”

How cisgendered can we be? pic.twitter.com/DWIWSHYcU1

The campaign seems to have started in March with actor Craig Young, who posted a photo of himself saying he was “man enough 2 vote 4 a woman.”

Image searches on Twitter, Google, and Reddit don’t show a clear origin for the second poster, and neither appears to be officially tied to the Clinton campaign. The photo did, however, show up on 4chan last night, and others on Twitter speculate that Trump supporters might have tweaked the original image to include the bearded hipster model.

Still, the message is clear: If you’re worried about voting for a woman, it’s OK, the government will not swoop in and revoke your gender identity.

Not one person is using the #ManEnough4Hillary hashtag in a serious fashion.

Where is Hill’s social media manager?

The thing is, though, the hashtag has a point. Many legitimate criticisms lobbed at Clinton are tinged with sexism, and it may be impossible to separate the two. There are still men who don’t believe any woman should be president, and according to the Economist, “Mrs. Clinton has won on average 44 percent of the white male vote compared to 56 percent for Mr. Sanders.”

Anyway, how is this not Clinton’s campaign song?

Update 2:00pm CT, May 26: The story has been updated to include the image’s appearance on 4chan and Trump-supporter-tampering theories.