Matt Diaz talks a lot about body acceptance. So he decided to practice what he preaches.

With his edgy mohawk and chic sense of style, Matt Diaz typically racks up dozens of notes on his selfies posted to Tumblr. But just a few days ago, Diaz opened up about something he’s been self-conscious about for years.

When Diaz was 16 years old, he weighed 495 pounds. Although he’s now 22 and has lost 27o pounds since his teen years, Diaz has rolls of excess skin left behind from his dramatic weight loss.

Standing in front of the camera, Diaz says, “I’m a big advocate for body positivity, but I’ve never shown what my excess skin really looks like. And I think it’s important that I do, because I want to be open with you people about who I am and what my body’s like.” Much of his online presence is devoted to speaking out about self-esteem along with sharing his transformation.

Before stepping away from the camera to reveal his bare torso, Diaz prefaces, “I’ve never done this before, ever, I’m really, really scared, so don’t judge too much I guess.” 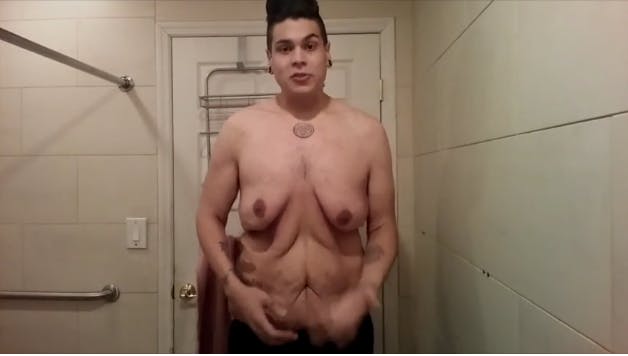 You can watch the whole video here.

Diaz explains that although he’s lost all the weight, he’s had trouble getting rid of the excess skin, which often requires surgery to remove. A few days after posting the video and receiving lots of support on Tumblr, he started a GoFundMe campaign to help pay for the procedure.

Diaz reached the goal in five hours. The campaign now has over 1,000 backers, and has well surpassed its original goal of $20,000.

Diaz writes more about his appreciation for everyone that’s contributed on the gofundme page, as well as on his Tumblr. Hopefully, his brave message about body positivity will help others embrace and celebrate their own bodies as well.