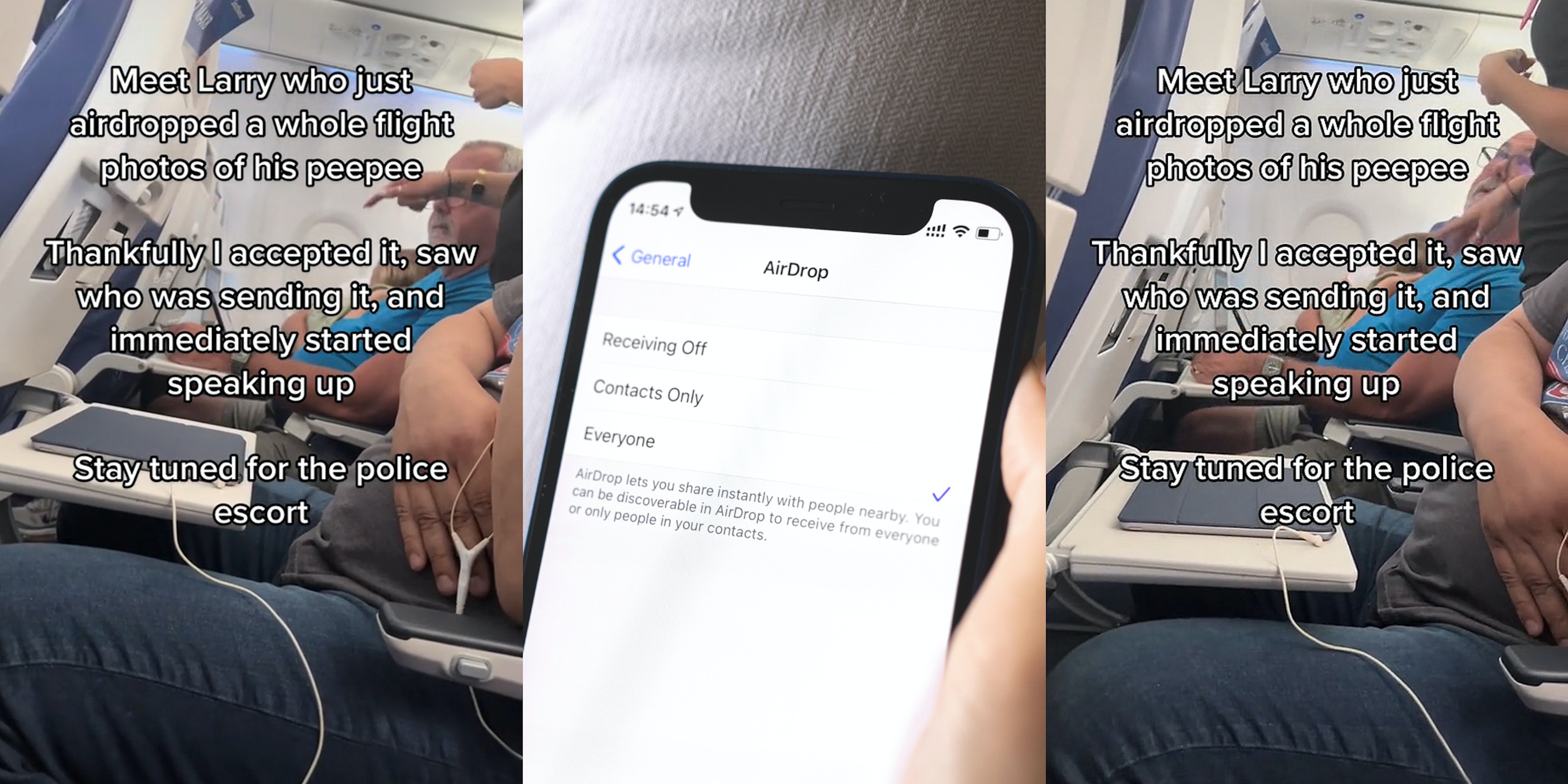 ‘He wanted to be caught’: TikToker claims man airdropped explicit photos to random passengers on plane

The man admits to airdropping the photos, saying he was "just having a little fun."

A TikToker recently went viral after claiming that a man was escorted off her airplane after attempting to send pictures of his penis to random passengers via AirDrop.

In a series of videos posted by TikTok user Mackenzie (@daddystrange333), she documents the incident which took place on a flight to Denver. She claims the man is “Lawrence Martin from Texas.”

Mackenzie’s initial video has received over 2.9 million views as of Sunday.

Lawrence Martin from Texas, grossssssss. I saw his ipad had airdrop open so I knew it was him, and yes, i sure did make a scene

“Meet Larry who just airdropped a full flight pictures of his peepee,” Mackenzie writes in the text overlaying the video. “Thankfully I accepted it, saw who was sending it, and immediately started speaking up.”

In the video, Mackenzie explains the situation to a flight attendant.

“This man is airdropping everybody…inappropriate photos,” she tells the flight attendant.

After a moment, the flight attendant turns to the man and asks, “You did it? You’re Larry?” He answers in the affirmative to both questions.

“Why are you doing that?” the attendant asks.

Following this answer, the flight attendant informs him that what he did was inappropriate, noting that there are children on board who could have been exposed to his lewd imagery. Mackenzie also hopped in to add that doing so was sexual harassment, to which the flight attendant agrees.

The man then apologizes.

In a follow-up video, Mackenzie claims the man was arrested after they landed.

Tldr: we got airdropped some n00ds and Larry acted like it was a casual Friday on our flight to Denver

“A few of us had to meet with an FBI agent who told us Larry was arrested and will be spending the weekend in whatever airport jail looks like,” she writes in the text overlaying the video.

She alleges that there was a child on the plane who was sent the photo, but didn’t approve the airdrop. “His dad was ready to fight,” she adds.

Mackenzie later posted a full “storytime” video explaining the situation, though she does not reveal any new updates about the case.

In the comments, viewers were taken aback by the events.

“Did he say ‘just having a little fun’?! when the flight attendant asked why?!!?” asked one user in surprise.

“The way he admitted It, he wanted to be caught,” another speculated. “He more then likely gets off on humiliation.”

“This is a good example of the type of man that is being protected by our federal government,” a third wrote.

The Daily Dot reached out to Mackenzie via Instagram DM, and both the Denver International Airport and Denver Police Department via email.