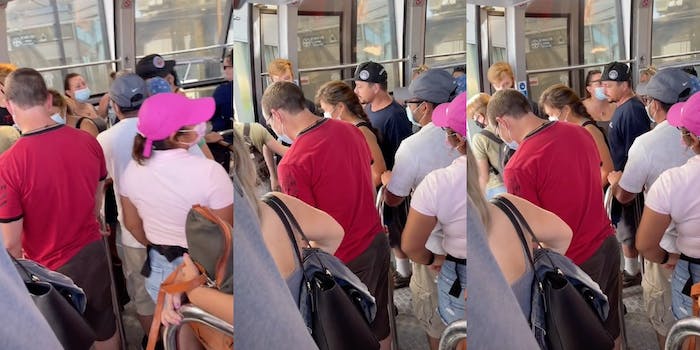 Nearby passengers had enough.

A man dubbed a “Karen” refused to wear a mask on the Palm Springs Aerial Tramway, prompting other passengers to have a panic attack.

Video footage of the incident was shared to TikTok by the user @expedition_neverland, garnering over 72,000 views as of Thursday.

The footage shows several masked passengers booing loudly or just looking generally uncomfortable on a crowded tramcar, although the male Karen can’t be seen on camera until the video is almost over.

Other passengers off-camera can be heard arguing unintelligibly until one woman clearly yells, “Don’t fucking argue with me.”

The camera pans over to the woman who continues, “Yeah I am a little fucking cranky. I have had my mask on the entire time. Shut the fuck up.”

She appears to be yelling at the man who isn’t wearing a face mask before the tram doors open and he walks away. Someone else suggested that the shouting woman leave as well.

“I’m not getting off. I have a baby, and I have asthma, and I need to get down, and I’m upset,” the woman said loudly. The tram driver appears to ask her if there’s going to be a problem, and she clarifies she has “no problem.”

According to the City of Palm Springs website, all customers, employees, and other visitors of the city are required to wear face coverings in indoor settings. The Aerial Tramway also specifies that all passengers must wear face masks while on the tram regardless of their COVID-19 vaccination status, according to its website.

TikTok viewers seemed to agree with the passengers that the male Karen should have worn a face mask.

“If he can’t follow the rules he should stay home,” one user commented on the video.

“Always one who doesn’t want to wear a mask and have trouble with authority! ‘The world is against them’ type ppl. We all know at least one!!” someone else said.

But others questioned why the man was even allowed onto the tram car if he wasn’t wearing a mask.

“If the rule is to wear a mask why was he even allowed on the tram?” one viewer asked. “Yes she should not have caused drama but rules are rules.”

The creator clarified that the man was wearing a mask when he entered but apparently took it off after.