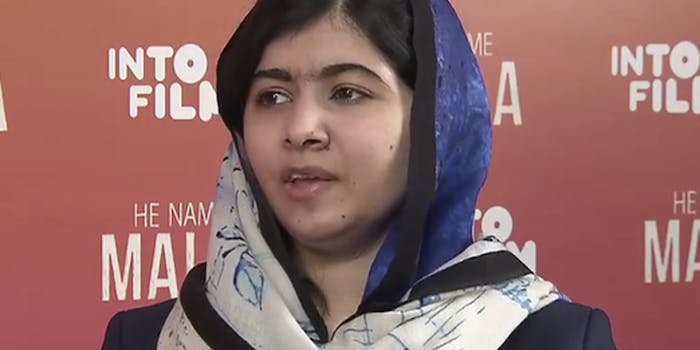 Two of the biggest names in millennial feminism had a chat.

In an interview with Emma Watson, Malala Yousafzai—Nobel Peace Prize winner and human rights champion from Pakistan—told the actress that she changed Malala’s mind about identifying as a feminist. Watson posted about the interview on her Facebook page.

“It has been a tricky word,” Malala told Watson. “When I heard it the first time I heard some negative responses and some positive ones. I hesitated in saying am I feminist or not?…Then after hearing your speech I decided there’s no way and there’s nothing wrong by calling yourself a feminist. So I’m a feminist and we all should be a feminist because feminism is another word for equality.”

Malala began speaking out about education for girls when she was 12 years old. According to the Guardian, Malala was 15 and on the way to school in Pakistan when she was ambushed and shot in the head for speaking out against the Taliban’s ban on female education. Today, she continues to be a symbol of inspiration, peace, education, and equality around the world.

“So I am a feminist and you are truly feminist, because feminism is another word for equality,” Malala told Watson.

Watson spoke to world leaders last year after being appointed a United Nations global goodwill ambassador for women. She gave the speech to launch her campaign He for She, which is aimed at encouraging men to speak up for women’s rights:

“I started questioning gender-based assumptions a long time ago,” Watson told the U.N. “When at 14, I started to be sexualized by certain elements of the media…when at 18, my male friends were unable to express their feelings, I decided I was a feminist. And this was uncomplicated to me.”