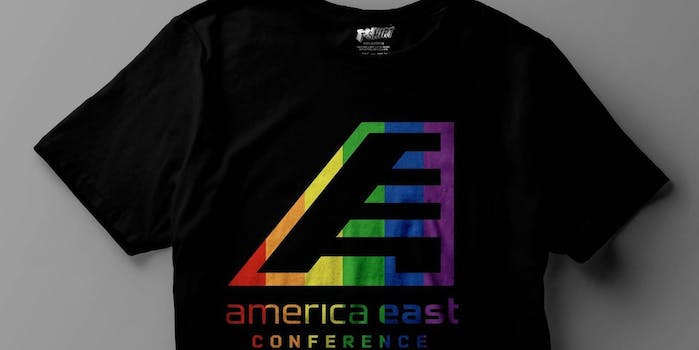 It's a good look.

Following the passage of North Carolina’s HB2 law, which bans transgender people from using the corresponding bathroom of which they identify, various sports organizations have responded by boycotting the state. The NBA moved the 2017 All-Star game away from Charlotte, and the NCAA’s Atlantic Coast Conference yanked all of its conference championship games out of North Carolina.

But instead of shunning Saturday’s game vs. Duke, the University of Maine men’s basketball is taking a different approach to protest the law. Before the game, which will be broadcast nationally on ESPN2, the Black Bears squad will wear rainbow-colored warmups.

In coordination with You Can Play, an organization dedicated to purging homophobia and transphobia in sports—and with the blessing of the America East Conference, which has been the most outspoken college conference on pro-LGBTQ issues—here’s the pregame shirt Maine will wear.

And here’s the team getting prepped for why its gesture is an important one.

The Black Bears will be a big betting underdog against the Duke Blue Devils—whose legendary coach Mike Krzyzewski has previously called the HB2 law an embarrassment to the state—and likely will be dominated on national TV. But Maine’s pregame outfits still will end up as the biggest winner of the day.