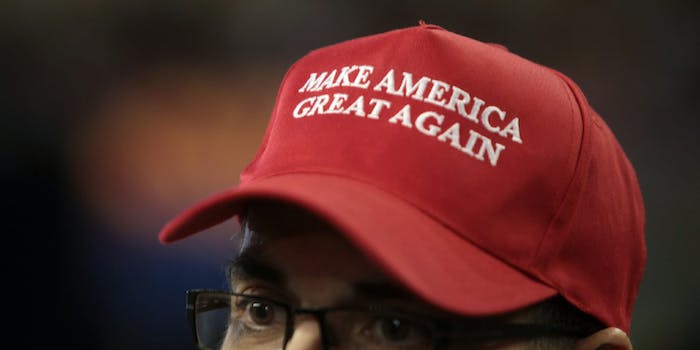 A man who sued a New York City bar for bouncing him over his “Make America Great Again” hat last year has had his case thrown out, with the presiding judge saying there nothing “outrageous” about the discrimination.

According to the New York Post, Philadelphia accountant Greg Piatek, 31, sued the bar the Happiest Hour in Manhattan for telling him to leave after he and his friends complained about the rude service from the bartender.

Piatek claimed the bartender told them, “Anyone who supports Trump—or believes in what you believe—is not welcome here! And you need to leave right now because we won’t serve you!”

Piatek’s basis for suing? That the incident “offended his sense of being American.”

Piatek’s lawyer Paul Liggieri told Justice David Cohen that Piatek had worn the hat after coming from the 9/11 Memorial, where he paid “spiritual tribute” to the victims, alleging that the MAGA hat was part of his “spiritual belief.”

“Rather than remove his hat, instead he held true to his spiritual belief and was forced from the bar,” Liggieri said.

Pressed further, Liggieri said the bar should have been aware of Piatek’s “beliefs” because he was wearing the hat, and agreed that Piatek’s “spiritual program” was a “creed of one”—just Piatek.

Cohen later tossed the case, stating it was nothing more than a petty slight, and that the “plaintiff does not state any faith-based principle to which the hat relates.”

“Here the claim that plaintiff was not served and eventually escorted out of the bar because of his perceived support for President Trump is not outrageous conduct,” Cohen continued.

Liggieri told the Post he plans to review the decision for the potential to appeal.

Update 3:10pm CT, April 26: Spokespeople for the Happiest Hour told the Daily Dot that according to owner Jon Neidich, Piatek wasn’t kicked out for supporting Trump with his “Make America Great Again” hat, but for being disrespectful to the bar staff:

“At the Happiest Hour we firmly support women’s’ rights, marriage equality, gun control, the environment, and regard for the truth- we don’t discriminate. What’s gotten lost in this story is that the guest wasn’t kicked out because he was wearing a Trump hat—he was asked to leave after being verbally abusive to our staff, which is something we don’t tolerate regardless of who you are. And this is after he spent almost $200—the 20 percent tip he left would seem to indicate he was satisfied with the service he received.”