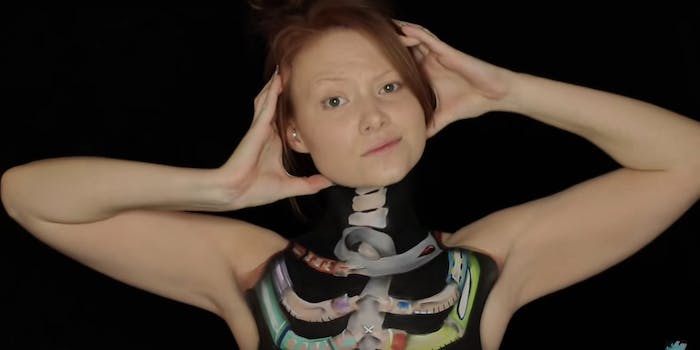 But this November she’s marking national Diabetes Awareness Month by opening up about her diagnosis with type-1 diabetes at age 13.

In her video, she talks about her struggles balancing school with managing her disease, and the toll it took on her personal life in the form of bullying by her classmates. But she discovered body painting as a way to take her mind off the stress of school, bullies, and diabetes. She soon found her calling, pursuing cosmetology and esthetics and became a licensed esthetician by the time she was 19.

Now that she’s grown into her career, she’s stepping up as an important ambassador for diabetes awareness.

Like cancer, diabetes isn’t just one disease. It can be congenital, develop during pregnancy, or develop later in life through a multitude of genetic and environmental factors. But the end result is the same: The body contains too much sugar in the blood or produces too much glucose.

Humans need glucose for energy, and they derive it by breaking down sugars from food. In a healthy person glucose is transported throughout the body by the hormone insulin.

Diabetes suffers a lot of misconceptions, like that everyone who has it is overweight and that it’s always brought on by lifestyle choices like eating too much sugar or not exercising. While weight and diet are both risk factors, they don’t tell nearly the whole story.

According to the American Diabetes Association, type-1 diabetes arises because the body is completely unable to produce insulin. Without the hormone to deliver glucose to needy cells, glucose just hangs out in the blood, causing blood sugar to spike. Only 5 percent of all diabetics have type-1 diabetes.

Symptoms of type-1 diabetes include increased urination, feeling very hungry or thirsty (even if you are eating well), and extreme weight loss. But when treated through insulin injections, people can lead very healthy lives.

The more common form of diabetes, type-2 diabetes, occurs when the body stops responding to insulin normally. It occurs in people for a variety of reasons that are still not fully understood. In some cases, people can manage type-2 diabetes through careful diet and exercise alone. However, managing it well is not the same as curing it, and medication combined with a healthy diet and exercise is necessary for most folks with diabetes.

A lot of people think that there’s a specific diabetes diet, but according to the American Diabetes Association, diabetics can eat anything, even candy. It just has to be balanced with plenty of vegetables, fruits, whole grains, and lean meats. Fleming added that there is no diet-based (or any) cure for diabetes.

Fleming said that managing her disease is a “constant roller coaster” as she wears her many hats. But she stressed that managing diabetes is always difficult, no matter what path people take in life.

There is NO exact formula to manage blood sugars perfectly. Even with medicines, we will still have highs, and still have lows. [Throughout] my hectic days, I have learned to work through the highs, and to drink glucose through the lows. There are times in which I feel like I could just flop over, or can’t process what people are saying very well, but still find the strength to get through tough Diabetes situations. Diabetes will NOT bring me down if I don’t let it.

She added that she feels it’s important to accept the disease as a part of what makes you who you are. “There are many diabetics out there that say they hate living with the illness, but you can’t hate it,” she said. “The moment you give in to your sugars, is the moment they will continue to control you. At the same time, also know that it’s okay to be stressed out, it’s OK to cry, and know when [it’s] appropriate for you to relax and listen to your body.”