The Daily Dot has learned the probable identity of the woman.

Protesters gathered outside the parliament building in Macedonia on Wednesday, calling for the resignation of Prime Minister Nikola Gruevski’s government. Among the approximately 1,000 people who came out to protest the government’s cover up of the 2011 killing of a 22-year-old man, one woman in particular stood out from among the crowd.

An image circulating Reddit and Twitter shows a young woman nearly flush up against a police riot shield, applying lipstick in the shield’s reflection. 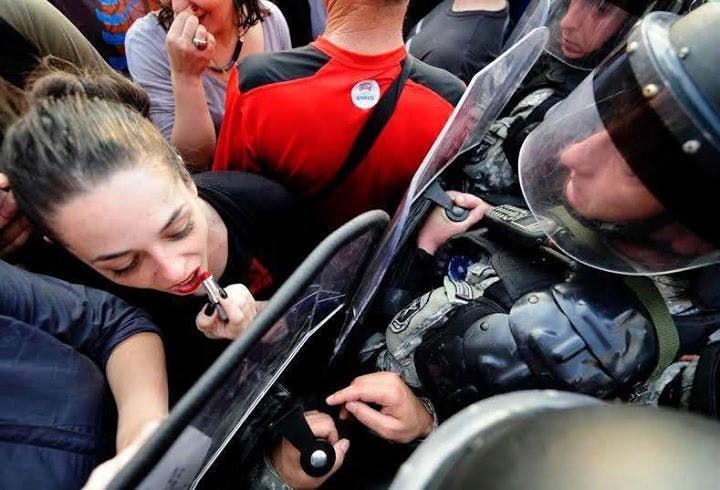 The photo was shared on Facebook by Aida Durut of Zurich, Switzerland. Durut does political work in Bosnia and has friends working in Macedonia. The Daily Dot got in touch with Durut via email, and she says she believes the woman in the photo is Jasmina Golubovska. According to Facebook, Golubovska works for the Helsinki Committee for Human Rights of the Republic of Macedonia.

Wednesday’s protest followed a night of violent riots on Tuesday, which left 38 police officers and 1 protester injured, according to the Associated Press.

Macedonia Interior Minister Gordana Jankulovska called it “a brutal attack on the police” and said that protesters beat police with metal bars and threw stones, bottles, and eggs at them.

Wednesday’s protest was reportedly peaceful and featured chants calling on the resignation of the conservative government—leaving time for make-up application, apparently.

Update 11:38 CT: We received confirmation from Jasmina Golubovska via email that it is, in fact, her in the photo. We’ll be speaking with her shortly.