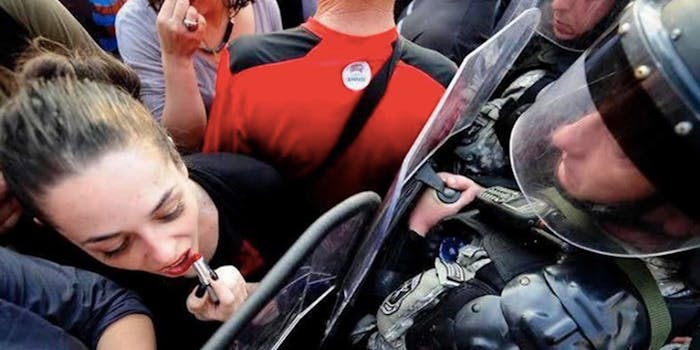 In this exclusive interview, Golubovska tells us what it's like to become a viral sensation overnight.

Jasmina Golubovska went from protester to Internet icon with the snap of a photo.

The 30-year-old political analyst and project coordinator at the Helsinki Committee for Human Rights in the Republic of Macedonia was captured in a now-viral image that shows her applying lipstick in the reflection of a riot policeman’s shield during recent protests in the country’s capital.

It’s a powerful image, for sure, but one that required a little context for us to fully appreciate the gravity of the moment.

“I am only glad that this photo will allow people to see what is going on in Macedonia.”

Golubovska was in front of the Macedonian capitol building in Skopje on Wednesday, May 6, to protest the 2011 police killing of 22-year-old Martin Neshkovski and the subsequent government cover-up.

At first, the photo was being widely shared without the woman’s identity, but the Daily Dot learned on Wednesday that it was Golubovska in the photo. We were able to get in touch with her via email in the midst of ongoing protests in Macedonia to find out the circumstances that led to the lipstick photo.

“I was with my friend, Biljana Ginova; and since I was the only one with red lipstick at hand, after two hours of standing and trying to convince the [police] unit to leave their shields and join us against the government, [I] decided to drawn him a heart on his shield, which he refused,” she tells the Daily Dot in an email. “Then I applied lipstick and kissed the shield instead. He was not happy.”

The image that rocketed across the Web is of Golubovska applying the lipstick. But a new photo that Golubovska shared with us shows her lipstick print on the officer’s shield. 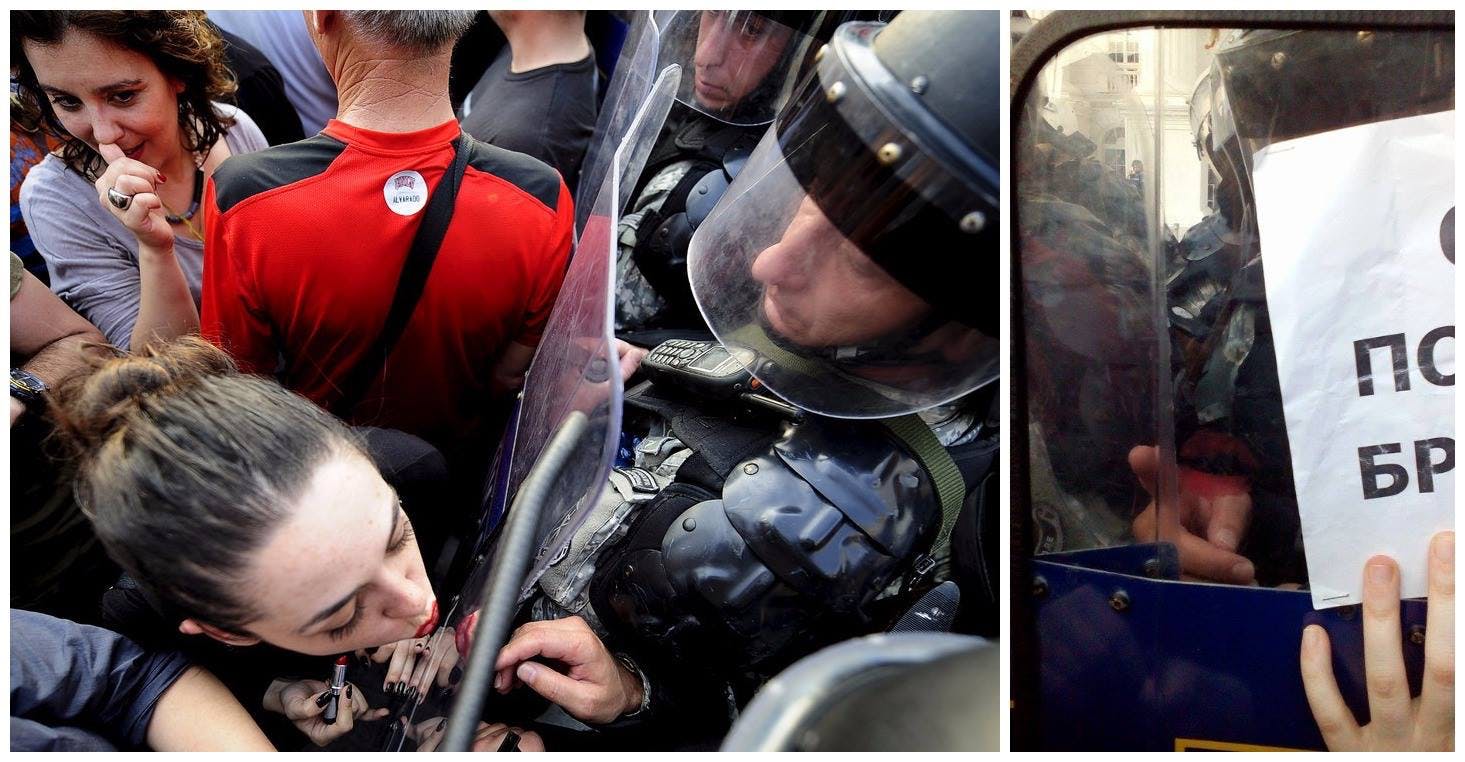 “We face criminal ruling of few powerful individuals who have access to every mean necessary to keep their seats in the executive government,” Golubovska said. “In a country with high level of poverty, governmental media and mafia ruling, the citizens are all victims to grave conditions for living and violations of human rights.”

If there’s one thing Golubovska hopes will come out of the popularity of the photo, it’s greater education about the situation in the tumultuous country.

“The violence must stop as soon as possible. We need new beginning as a country without violence.”

“I am only glad that this photo will allow people to see what is going on in Macedonia, spread the word so we can apply stronger pressure to the ones in power to leave as soon as possible.”

So how does it feel to be an instant Internet sensation? “I don’t think about it,” says Golubovska, “but if it serves for faster dissemination and solidarity among all people, than that is sufficient for me.”

And even as her viral moment fades—as viral moments so quickly do—the fighting rages on in Macedonia.

“We have some unknown groups producing violence in the city of Kumanovo and reports of civilians and police officers,” says Golubsovka. “The violence must stop as soon as possible. We need new beginning as a country without violence. That is the priority.”