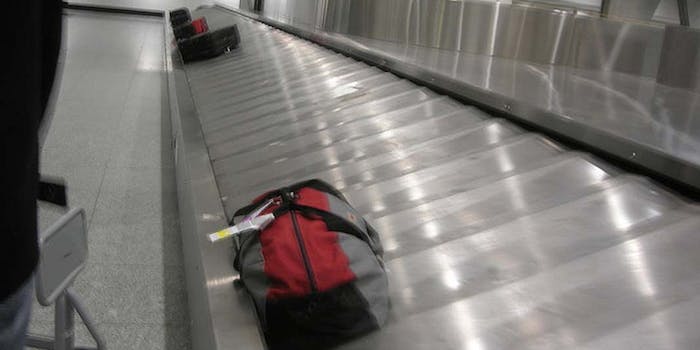 Why did this airline slap ‘I Am Gay’ on a passenger’s luggage?

"I was degraded. I was shamed. I was humiliated."

Over the weekend, an Australian man tweeted out a photo of his suitcase, which was returned to him before a connecting flight on the Melbourne-based airline Jetstar. It looked a bit different than when he checked the bag: Someone had added the words “I am gay” to the front of it, in luggage stickers.

Utterly disgusted to find my luggage front and center on the @JetstarAirways luggage carousel looking like this. pic.twitter.com/ErU7LhRZDd

On his blog, the husband and father went further into the incident, and what happened after he picked up his bag from the carousel:

“I plucked the suitcase off the carousel and had many eyes look me up and down. I was taken aback by the slogan but thought I had thick enough skin to ignore the leering. My connecting flight was about to board so I had to speed through the terminal to check in with Qantas. As I dragged the case through the terminal, I looked back at the people I had passed and they too looked at me differently. My luggage was a scarlet letter.”

There’s no mention of why this phrase ended up on the man’s bag; there doesn’t seem to be an incident that sparked it, or a personal angle. He does mention that the airline has been in touch and is “conducting a ‘serious’ investigation.”

Even though Jetstar seems very responsive to customer complaints on Twitter and has issued an apology, this raises issues about a passenger’s privacy. The phrase “I am gay” isn’t necessarily derogatory, though in this public context, the passenger did interpret it as such. (A request for comment went unanswered.) Transgender Sydney journalist Kate Doak responded to this tweet with issues of her own:

@macleanbrendan @aaronpp I can’t say I’m surprised by this… I had trouble w/ @JetstarAirways staff in Sydney due to being Trans back in May.

The passenger goes on to say this incident is not about him, however:

“I am a white heterosexual male. This trifecta of privilege means that I’m not routinely subjected to prejudice. But for a few minutes I got to walk in the shoes of a gay person in a public place. For no good reason I had a slur marked over my luggage. I was degraded. I was shamed. I was humiliated.

For me, this was only a few minutes of one day of my life. If what I felt for those few minutes is extrapolated out every day over a lifetime, then I can fully understand why our gay friends feel persecuted and why they have such high rates of suicide. It is unacceptable.

Some people have been commenting that it’s probably just some loser in backrooms making a distasteful joke. Or that Jetstar has a culture of homophobia. Unfortunately, the mistreatment of our gay friends spans society. It goes all the way up to our political leaders and includes such luminaries as our Prime Minister. Our laws ensure that homosexuals are not afforded the same rights and dignities that many of us straight people take for granted every day.”

Yes, the scarlet letter comparison might be a bit much, but his heart seems like it’s in the right place. To end his blog post, he quotes a line from the now-viral YouTube clip of Australia’s chief of Army, addressing sexual harassment in the ranks this past summer:

“As for the people calling me a whiner and telling me to toughen up, I would like to quote Lieutenant General David Morrison: The standard you walk past is the standard you accept.”