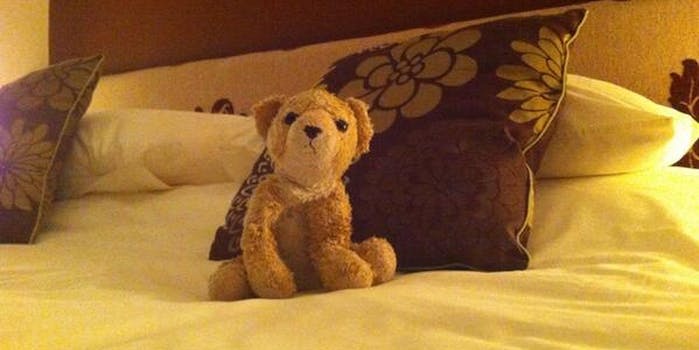 Thanks to the Internet, this lost lion is finally home sweet home

Despite all his adventures, for Roar the lion and his human Phoebe, there's no place like home.

There are plenty of reasons to be wary of the big bad Web, but, occasionally, the heartwarming actions of a few users help to restore our faith in humanity—if only just a little. Such is the case of Roar the stuffed lion and his human friend Phoebe.

The story began last week in London, when a businesswoman discovered a worn-out stuffed animal, which she understandably mistook for a teddy bear, on board a train at for King’s Cross. Concerned that some child might be missing the stuffed animal, Lauren Bishop Vranch, a London-based marketing director, who also identifies herself as an “occasional bear,” tweeted about the animal, which would later be identified as “Roar the lion.”

Roar tagged along with Vranch throughout the day, and she posted photos of their adventures to Twitter. They went to the Newcastle Haymarket for tea, enjoyed Christmas decorations at a cozy pub, and later to Northern Stage, where they fancied a pantomime performance.

But while Vranch and Roar were getting along famously, the likelihood that some poor kid was in tears over her lost friend weighed heavily on Vranch’s mind and her Twitter account.

Sad #lostbear Not out of the (metaphorical) woods yet. Someone must know him. pic.twitter.com/D0TrCdRKGv

As hours turned into days, the question remained: Would a sad child and her stuffed bear/lion/dog/whatever be reunited or not? Thanks to a signal boost by Twitter user Lost Teddy Bear, an account that specializes in exactly what you’re thinking, and the Facebook page Spotted: On the Train, a happy ending was, indeed, in sight.

Well done, internet!! It looks like the owner of #lostbear has been found. Bear is actually a lion – oops! :) Thanks everyone!! 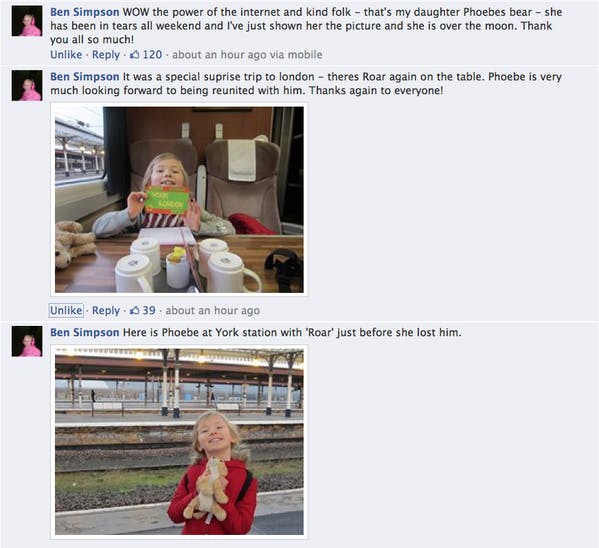 The stuffed animal’s human companion was revealed to be Phoebe, and according to her father, Vranch was right: Phoebe was crushed by the loss of her friend Roar. It was a long journey for sure, but a little girl and her lion will be united once more.